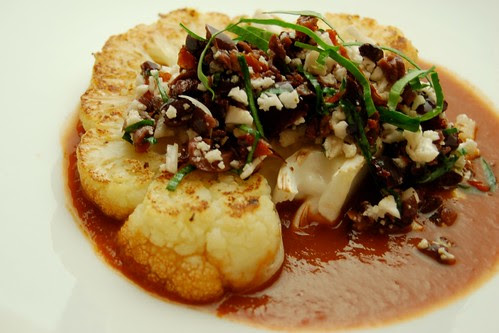 1. this steak is not made of cow.
2. Also, I made this a month ago. The sorrel that I used in this recipe is no longer hanging on against the oncoming winter. Winter has come, and the sorrel is dead. Oh, well.

Relevance of thing one: vegetarian food is, like, so hot right now. A couple of my friends recently did a two week vegan challenge, and one of the editors of Serious Eats is doing the same thing.

Relevance of thing two: sorry about that. (And hi, Dad!)

ANYWAY. Even if you're not a vegan or a vegetarian or what have you, I don't think you'll miss the meat here. Plus it's easy! Sear some cauliflower, and while it finishes in the oven, throw together a quick relish. A can of tomatoes and a few cloves of garlic for a sauce and HEYO! dinner.

Cauliflower Steaks with Olive Relish and Tomato Sauce
serves 2-3, with some leftovers
adapted from Bon Appetit

Mince the garlic. Heat a small sauce pan over medium heat and add a tablespoon of olive oil, sweat the garlic until it smells good. Add the tomatoes and simmer until the rest of dinner is done, then season to taste with salt and pepper. You can puree the sauce with an immersion blender if you want, I did, but I bet it would be good either way.

Trim the leaves off the cauliflower and trim the stem a little bit, if it's icky. Slice it into thick slices, about 3/4" thick. You should be able to get 3 good ones from the center of the head. There will be lots of cauliflower crumbs. Keep them! They go in the relish.

Heat another tablespoon of olive oil in a skillet and sear two of the "steaks" until golden brown on both sides, a few minutes on each side should do it. You may have to work in batches depending on the size of your skillet. Once they're browned, transfer the steaks to a rimmed baking sheet and stick them in the oven for 15 minutes to finish cooking.

While they're in the oven, chop up the remaining cauliflower so all the crumbs are the same size, or until you have about 3/4 of a cup. Chop up the olives and sun dried tomatoes, then add the parsley, remaining 2-3 tablespoons of olive oil and lemon juice. Season the relish with pepper and a little bit of salt.

When the cauliflower is tender, stick it on a plate with some of the sauce, then put some relish on top and enjoy. 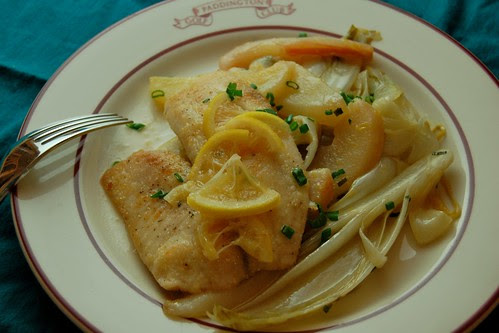 Fish with pears? Fish with pears. But more on that in a second - first, let's recap New Year's Day Epic Brunch 2012. Citrus salad, to make you feel virtuous. I put it on the meat table (bacon, corned beef hash, sausage rolls) because I thought it was funny. 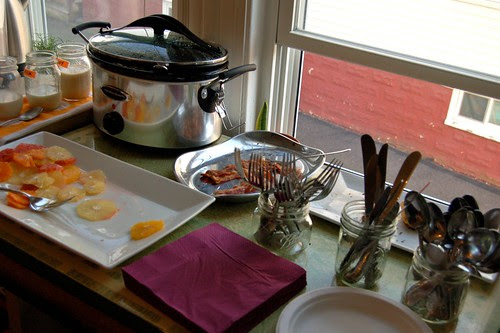 Tyler (he of the family smoke house) brought oatmeal, there were two quiches (mushroom and goat cheese, poblano and monterey jack), homemade danishes, Cara's cranberry muffins, spinach and gruyere strata, Glen's famous kugel, and a roasted sweet potato thing I put together with some pecans and pomegranate seeds and mint because of course I thought EEK! There's not going to be enough FOOD! Clearly I am a crazy person. 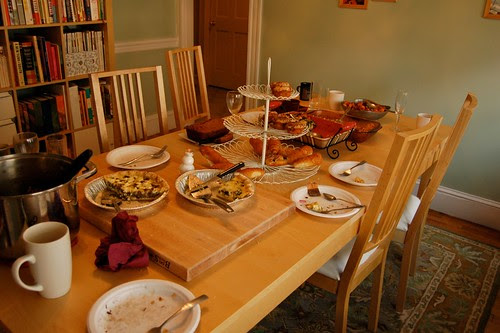 Also decorating the house this holiday season is my new friend Salty the Snowman, who I think is completely hilarious, so thanks, Santa. Seasonings Greetings to you, too! 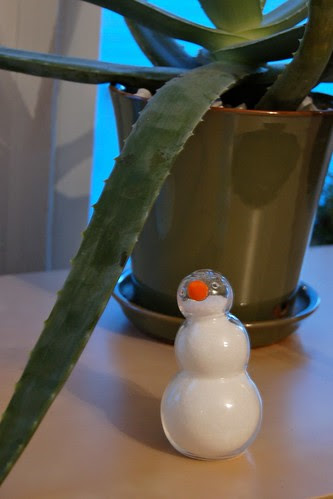 But now let's get back to the fish at the top of this post. I didn't really make any resolutions per se this year, but I did decide I should try to cook and eat more fish. So good for you! So tasty! So many different fish to try!

Since this brand new year began just 12 days ago, we've had fish for dinner twice! Already an improvement over last year. I made this salmon last week, and last night we had this oddly delicious thing from the most recent issue of Fine Cooking. I say odd because fish and fruit struck me as bizarre, but not too bizarre to try. As it turns out, pears love salt! And I love pears and salt.

I usually halve recipes that "serve four" when it seems like it will be too much food, but this time I just bought three small tilapia filets (the extra one is for Adam's lunch the next day) but left the veg amounts the same as the original recipe. I'm glad I did, I don't know if this would have been enough for four people, but then you could always make some rice and call it a day, eh?

Zest the Meyer lemon with a microplane; you should end up with almost two teaspoons. Also your hands will smell AWESOME. Slice the lemon in half and juice one half to yield about 1 1/2 tablespoons of juice. Thinly slice the other half, then cut the slices in quarters. You may ned to pick out some seeds.

Heat a medium saute pan (one with a lid) over medium heat. Melt 3 tablespoons of butter, then add the endive, pears, lemon juice and zest, and season the whole thing with a good pinch of salt. Stir to combine, then cover and reduce the heat to medium-low. Cook, stirring occasionally, for 20-25 minutes or until the endive is tender throughout. Remove the cover and continue cooking until there is some browning on the pears and endive, another 5 minutes or so.

While the endive and pears cook, combine the flour and cornmeal in a shallow dish along with a big pinch of salt and pepper. Heat another saute pan over medium high heat and add the olive oil. Season the fish on both sides with salt and pepper and dredge in the flour mixture. Make sure the pan is pretty hot before you add the fish or it won't brown, but cook the fish about 3 minutes per side until it's just cooked through. Remove the fish from the pan, wipe out any residual cornmeal with a towel and add the remaining 2 tablespoons of butter. Once the butter melts, add the quartered lemon slices and cook for about a minute, then add the wine and a pinch of salt. Let the wine reduce by half, then spoon it over the fish and endive. Meyer lemons are pretty sweet and if you slice them thinly and cook them through you can eat them. If you used a regular lemon, you may not want to eat the pieces.

Posted by Adrienne at 9:21 PM No comments: