While I'm currently scrambling to find room in my fridge for everything on the menu tomorrow - it's time for our Third Annual New Year's Day Epic Brunch - I wanted to pop in and say Happy New Year to all of you lovely people. I don't know about you but 2011 has been a banner year for me and I'm raising a glass tonight to 2012 being even better.

May your evening be bubbly and sparkly and your mornings hangover free, and I'll see you all in the new year. Cheers!
Posted by Adrienne at 6:30 PM 1 comment: 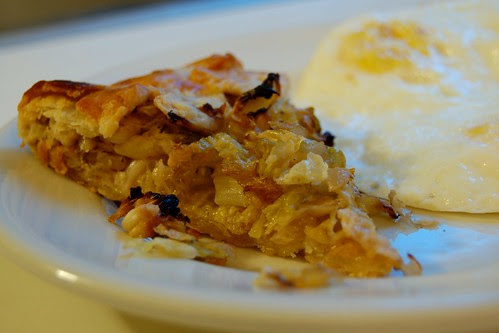 Our friend Tyler has an grandfather in Vermont (and, you know, a mom and a dad and a whole family). But the grandfather is the one with a smokehouse where he smokes, among other things, Vermont cheddar cheese. Cheese so smokey it imbues its woodsy flavor on anything else you keep in near it in the fridge, so you have to keep it double bagged. Cheese that, it turns out, is completely brilliant in a pie with cabbage. Brilliant!

My apologies for a lousy photo, but this is was (I ate it for breakfast!) the last piece of galette. Galette is French for sloppily made pie (or something) and it couldn't be easier - roll out a crust, fill it with stuff, fold up the edges and bake it. Ta-da! No pie tin necessary. I had a couple of ounces of sausage left over from the sausage rolls I was making and freezing for my New Year's brunch, so I threw that in, but don't sweat it if you don't have any. Vegetarian cabbage pie will be equally delicious.

I prefer the Ratio 3-2-1 pie crust for most applications - three parts flour, two parts fat, one part ice water. I also find it very handy to have pie crust in the freezer so I make them four at a time (enough for four single or two double crust pies). Here's how: put 24 ounces of flour, two big pinches of salt, and 16 ounces of chilled, cubed butter in a stand mixer fitted with the paddle attachment and bang it up a bit until the pieces of butter are the size of your thumbnail. Or the size of grapes. You know, not so big. Put some water in a bowl and add a bunch of ice cubes. Cold is key! Stir it up a bit (or do this before you measure the flour) and when you're ready for water, measure out 8 ounces (one cup) of the now-icy-cold water. With the mixer on low speed, add the water in a slow stream, just until the dough clumps together. When you squeeze some in your fist it should stick together well. Divide the clumpy mess into four parts and wrap each in plastic, using the plastic to shape the clumps into a cohesive disk. Rest the dough in the fridge for at least 30 minutes before rolling, or freeze for 3-4 months.

one pie crust, thawed overnight in the fridge if frozen
flour, if needed for rolling out crust
half a green or savoy cabbage, core removed, thinly sliced
one small onion, diced
a few ounces of sausage, if you have it (totally optional, though)
2 cloves garlic, minced
1/4 cup sour cream
3-4 ounces smoked cheddar or another smoked cheese, shredded
one egg beaten with a splash of water or milk

Let the crust sit out on the counter while you cook the onion and cabbage so it'll be easier to roll, but don't let it get actually warm.

Melt the butter in a large skillet and cook the onion until translucent. Add the garlic and cook until fragrant, then add the cabbage and cook until wilted, tossing regularly. Season with salt and pepper. Taste it and adjust the seasoning if it needs more salt. If you're using sausage, throw it in now, breaking it up with a spoon and let it cook most of the way through. Shut off the heat, then add the sour cream and stir to mix it in.

While the cabbage is wilting, roll out the pie crust on a lightly floured counter and transfer it to a cookie sheet lined with parchment paper. It doesn't have to be a perfect circle but go for at least an 11 or 12 inch amoeba-shape. Sprinkle the shredded cheese in a circle on the crust, leaving a two inch border all the way around and pile the cabbage over it.

Fold up the edges to contain the filling and brush the crust with the beaten egg. Bake for 20 minutes, rotate the pan and bake another 20-25 minutes until the filling is hot and the crust is golden brown.

Posted by Adrienne at 8:58 PM No comments: 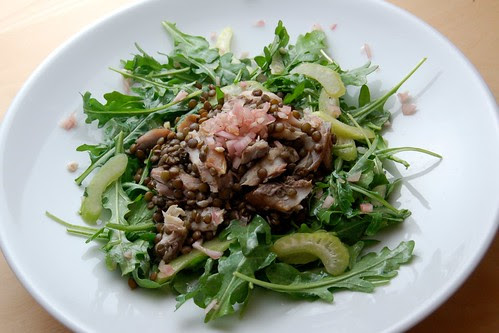 Saturdays at work are crazy busy this time of year. Usually there's someone representing one of our favorite producers tasting wine or ice cream or something delicious, and this week was no exception. Dave's Cape Cod Smokehouse was there this weekend selling EXTREMELY DELICIOUS smoked fish. I was particularly fond of the smoked bluefish (and the bluefish spread, yum) so I brought home a big fillet. The smoky flavor played well against the peppery bite of arugula and earthiness from the lentils, and the pickled shallots are a great high note. Go find yourself some delicious smoked fish and try it!

Bring two cups of water to boil in a medium saucepan, add lentils, reduce to a simmer and cover. Cook, covered, 20 minutes or until lentils are tender, then season with salt. If the lentils are tender before all the water is absorbed, drain the excess water out.

While the lentils are cooking, slice the celery and pickle the shallots - just pour the red wine vinegar on them. If you need a little more vinegar to get all the shallots covered, add it. Add a bit of salt and pepper, then let them sit for 20 minutes. Drain the vinegar off, but save it! Add the dijon mustard and whisk in enough extra virgin olive oil to make a tasty vinaigrette. You might need to add a bit of salt and pepper to the vinaigrette - taste it with a leaf of arugula and a slice of celery to make sure it works together, and adjust the seasoning as necessary.