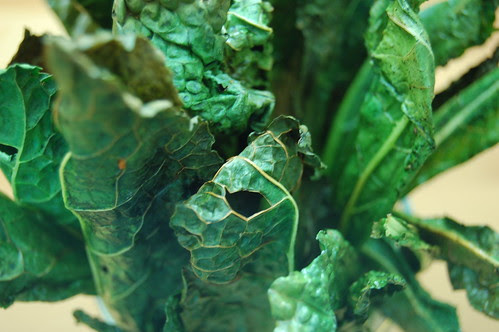 I know it's been a quiet month here, my friends, but I was browsing my Flickr stream the other day and I realized I never told you about Adam's favorite snack! Please to be forgiving me for my oversight... and please to be sharing with me when you make these. 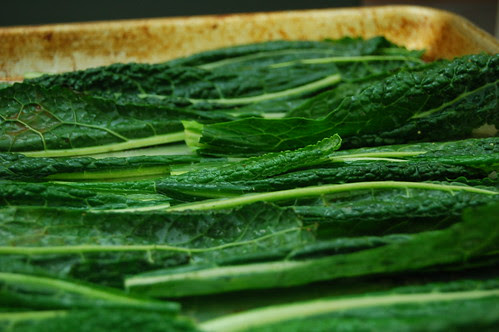 Oh and how about this: kale chips are as easy as freakin' pie. Easier! No rolling of stubborn dough. You just wash your kale and dry it super well (wouldn't want it to steam in the oven). Put it in a big bowl, toss it with a glug of olive oil - not too much - salt, pepper, and maybe some hot sauce or a little vinegar if you're feeling adventurous. 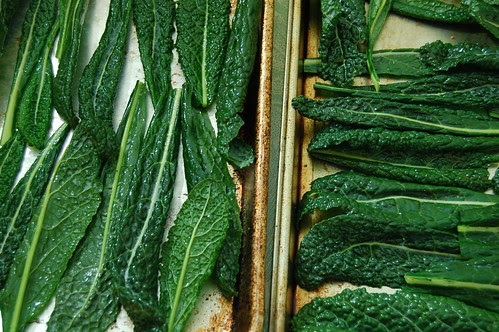 Spread it out on a cookie sheet or two, and bake at 350 for 10-15 minutes. You should flip the chips over half way through. Start checking them at 10 minutes, some of the smaller leaves will be ready, though the big ones will still have some chew left in the stem. 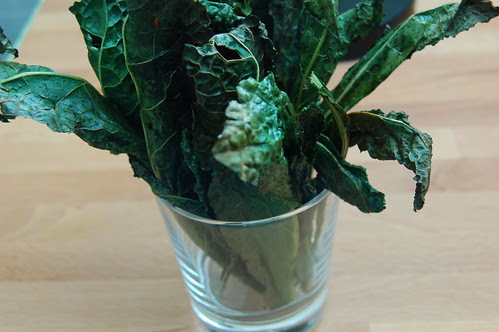 Once they're crispy and dry (smaller leaves will be done first) stand them up in a glass and take a pretty picture. OR just stand at the stove and eat the whole pan. That's what we do, so I won't judge you.

In a very large bowl (or in two batches) toss the kale leaves/pieces with oil, salt, pepper, and hot sauce (if using). Spread in a single layer on two baking sheets. Bake for 10-15 minutes, turning once, until kale is dry and crispy.
Posted by Adrienne at 9:06 AM 10 comments: 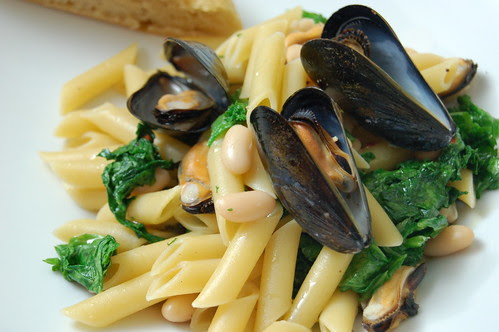 I wish I could say I've never been a picky eater, but if we're being honest I should confess: when I was a kid my salads were more Hidden Valley Ranch and from-a-box croutons than vegetables. I didn't like raw tomatoes until at least the tail end of high school. Ham? No thank you. Spicy food? Mmm, I'll pass. I grew up in Maine, but it was years before I would even consider a lobster. And nothing - I mean nothing - could get me to eat a mollusk. Clams, oysters, the whole phylum was just skeeved me out. (BTW, Mom, sorry if that was annoying for you. I'll make it up to you in preserves and pickles this year, ok?)

While I still don't like ham (or watermelon, ew), I've recently come around to the allure of shellfish. I've eaten an oyster or two. I've sampled a clam. And then last winter I went out to dinner with my parents to one of Portland's best restaurants, five fifty-five, and I tasted the mussels my mom had ordered. It really was like a light bulb went off! They were smokey and briny and when you dipped the bread in the broth it just melted into a little seafood implosion on your tongue. I was SOLD. 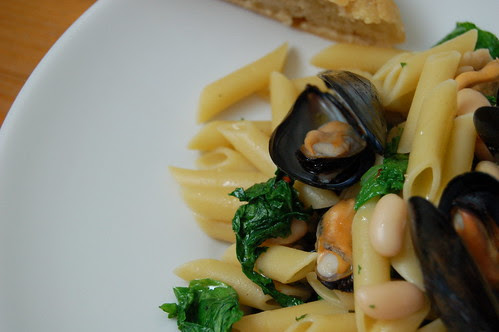 But for the last year, mussels were a food I only ordered in restaurants, not something I cooked at home. The scrubbing, and the how would I know if they were dead, and the what if I gave us food poisoning with dead mussels!, it was just too much. But then I saw Mark Bittman's minimalist column in the New York Times a couple of weeks ago, and I could put it off no longer. Mussels, beans, AND pasta? These are a few of my faaaavorite thiiiings... plus the bitter mustard greens that were wilting in the fridge from what turned out to be our last CSA pickup of the year (that rant coming later, I assure you). And mussels are only $2.49 a pound! My friends, this is a keeper.

Pasta with Mussels, Beans and Greens
adapted from Mark Bittman

If you don't like bitter greens, by all means leave them out and use the parsley called for in the original recipe. If you like greens but don't like bitter, use swiss chard or kale or something more mild than the totally insane-in-a-good-way mustard greens. While you're cleaning the mussels, discard those with cracked shells, or those that don't close when you tap them a couple of times. Once they're cooked, discard mussels that HAVEN'T opened.

Bring a pot of salted water to a boil.

Put the clean mussels in a large pot, cover with a tight fitting lid, and turn the heat to medium-high. You can add a splash of water if you like, but the mussels will let out enough liquid to steam themselves. When you hear the liquid bubbling, turn the heat to medium low and give the pot a shake every 10 seconds or so. When the mussels open up, they're done, probably 3-5 minutes. Shell most of them but leave a few in the shell for presentation if you like. Strain the liquid left in the pot (or just pour it out slowly leaving the gunk at the bottom).

Meanwhile, cook the pasta in the salted water, but take it out while it's still firm, it'll cook more in the pan with everything else. (Come to think of it you could even cook it ahead of time and use the same pot for the mussels.)

Heat a large skillet over medium high heat, add the 2 tablespoons of oil. Add the garlic and red pepper flakes and heat 30 seconds or until fragrant. Add the chopped greens. They should wilt quickly, but they'll go faster if you cover the pot for a minute or two. When there's room in the skillet, add the pasta, white beans, mussels, mussel cooking liquid and a splash of white wine (2 Tbsp or so). Stir to combine, and season with salt and pepper. When everything is warmed through, it's ready to serve, with some good bread for sopping and a glass of that white wine.
Posted by Adrienne at 9:57 PM 13 comments:

You should see my kitchen floor.

Guys. Seriously. I have got it BAD. You see, after a Cantacular experience at the Can-O-Rama, I can't. stop. Let me just give you a little run down of the stuff I've been making but not yet eating in the last week: 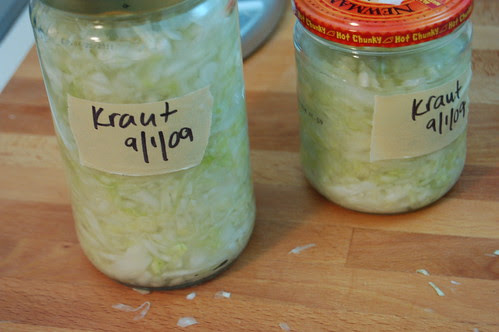 I made more sauerkraut. I brought a big jar of this home to my dad last weekend, and we ate it on red hot dogs. Awesome. 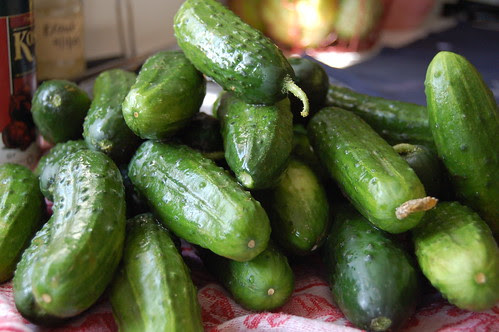 I pickled eight pints of cucumbers with dill from my mom's garden. And it just dawned on me that I forgot to give some to my sister when she was here an hour ago. Oops. Julia, come back for pickles! 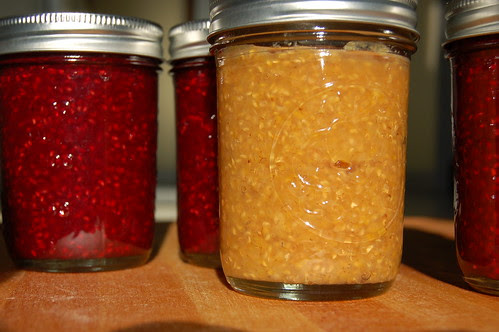 I made raspberry jam. 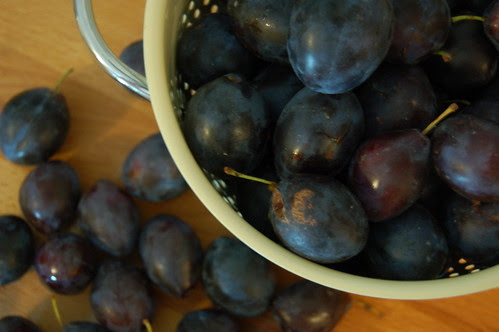 I preserved some plums in honey syrup. Cannot WAIT to eat these on ice cream. And yogurt. And with cake. (Mmm, cake...)

I also roasted five pounds of plum tomatoes, and put most of them in the freezer. I made five pints of salsa, which, knowing Adam, will last about another month. I made some experimental spicy carrot pickles, and I put up four quarts and a pint of crushed tomatoes.

Lest you think I've lost sight of the trees for the forest, allow me to say I have been actually eating some of the summer's gorgeous produce, not just squirrelling it all away for winter. I made the wonderful gin-spiked tomato soup from September's Gourmet,

but I forgot to take pictures. Sometimes we have popcorn and crudites while playing cribbage. Most often we just throw some veggies in a bowl with a simple vinaigrette and call it salad. I did, however, turn on the stove for something other than the canner and made something quite similar to this pasta last night, though I used some of those roasted tomatoes. I guess what I really want to say is, please bear with me while I get the madness out of my system. Even if I'm not blogging about it, you can keep up with the food I'm eating/canning through the photos on my Flickr stream if you are so inclined.
Posted by Adrienne at 9:06 PM 11 comments: 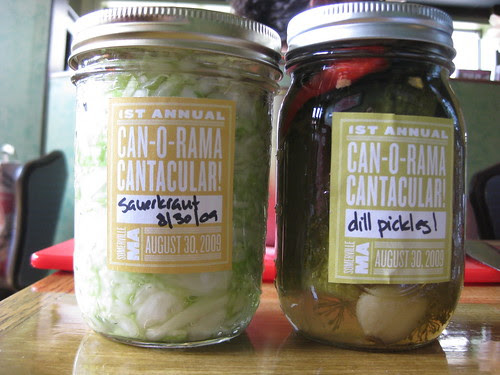 Perhaps you've heard it? The hustle and buzz around the interwebs? America's plugged-in home cooks and food-obsessed are all talking about the Canvolution. It started in Seattle and it has spread east with a frenzy, culminating last weekend in canning and preserving parties all over the country. I was lucky enough to attend the Boston area event in Somerville on Sunday. Organized and led by Linsey of Cake and Commerce, 20 plus canvolutionaries gathered in a borrowed Thai restaurant to discuss boiling water canning, pressure canning, and lactofermentation. Things got hands on (and messy!) and we all went home happy with jars of tomato sauce, dill pickles, sauerkraut, and mixed berry jam. (Actually, I stuck around to help clean up and was rewarded with an extra jar of jam for my troubles, wee!). Linsey, who taught boiling-water canning, wrapped up the experience on her blog here; Nika, who demonstrated pressure canning, discusses the day on her blog, too. Oh, and if you're interested in the sauerkraut, check out Alex's blog as well.

Of course, now I've got the canning bug and I went out and bought a big ol' canning pot and some jars the other day. I can't wait to hit the markets this week, and I sure as heck hope my friends and family like jam, because I know what everybody's getting for the holidays this year!

So tell me, friends: Do you can? Have you got any favorite pickle recipes?What about drying? Freezing? How do you keep summer's bounty preserved for the chilly days of winter?
Posted by Adrienne at 9:00 AM 5 comments: