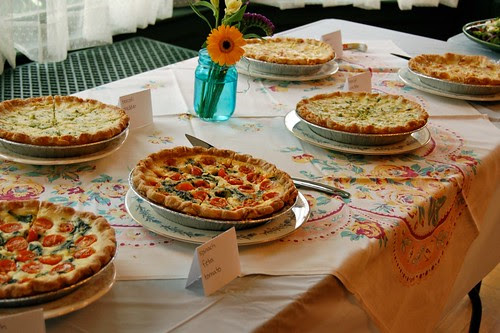 Hi friends! My sincere apologies for the abrupt disappearance. You see, I've been awfully darn busy: first I catered my cousin's bridal shower (well, technically, my cousin's fiancee's bridal shower, but in like 6 weeks Kate will be my cousin, too). Part of the spread was the quiche parade you see above.

And then I got a job! Hooray! I've been working a couple of days a week until the woman I'm replacing moves to southeast Asia, and then I'll be full time in the catering kitchen at Formaggio Kitchen. Guys, it is a really cool place to work.

Finally, I've been canning up a freaking storm. You remember how much I put up last year? This year I'm in line to fill the cupboard and then some. I've got almost two dozen pints of salsa done, plus tomatoes and pickles and jams, oh my. I've gone through 75 pounds of tomatoes in the last week, so while I'm up to my elbows in sugar and vinegar and vegetables, I haven't had a chance to write here. Today is the last big push for my late summer canning - peach salsa, tomato jam, jalapeno jelly, pickled jalapenos and tomato juice. I'll be back soon!
Posted by Adrienne at 9:44 AM 5 comments: 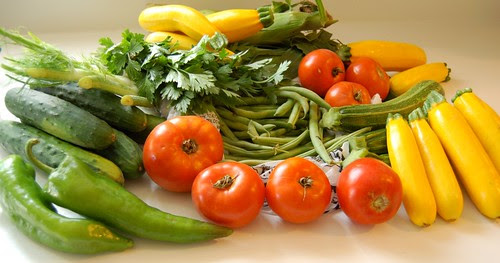 Man oh man I have been bad at blogging this year's CSA share from Stone Soup Farm. For the first few weeks of pickups I was still in school and Adam picked up the share, so I never photographed it, then I sort of forgot about photographing the shares at all. Last week's pickup, however, was so beautiful that I remembered! Yay!

We got: two cubanelle peppers, two pounds of tomatoes, three ears of corn, one bulb of fennel, a bunch of parsley, half a pound of green beans, five cucumbers and a loooot of yellow and green zucchini. The sign at the pickup actually said "as much as you want!" under "cuke/zuke/squash" so that's exactly what I took. We ate the peppers fried with some onion and shredded chicken in fajitas last week. I was away this weekend, and I took the cucumbers  with me, but Adam ate the corn and green beans, and I used the fennel and some of the squash last night in pasta. I plan to pickle the rest of the zucchini. How about you guys? How are your CSAs going?
Posted by Adrienne at 11:13 AM 2 comments: 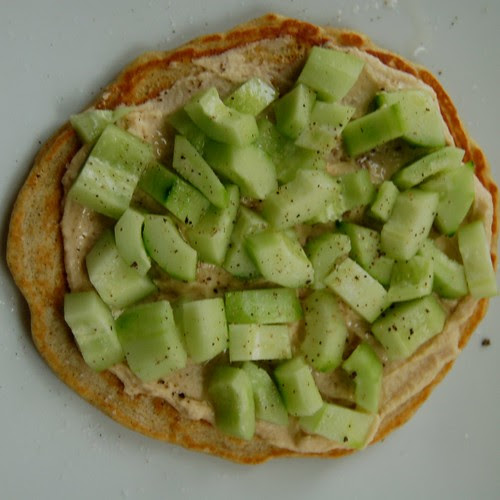 Incidentally, since Adam's pancakes have no sugar, they make a pretty good canvas for savory things, too. This one is hummus, chopped cucumber with salt and pepper, and a drizzle of garlic oil. It made an excellent afternoon snack.
Posted by Adrienne at 7:17 AM 1 comment:

Email ThisBlogThis!Share to TwitterShare to FacebookShare to Pinterest
Labels: miscellany 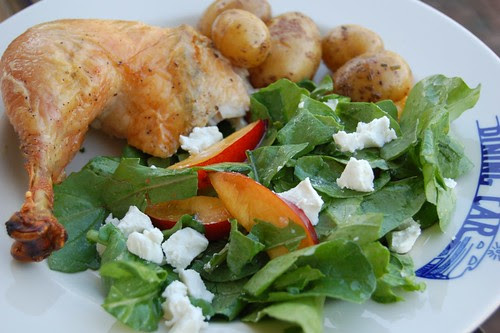 This salad was an afterthought. Monday night I roasted a chicken, Zuni style, and we had some CSA potatoes that I cooked up and dressed with a simple vinaigrette and some garden chives. Everything on the plate was sort of the same color so I dug some arugula out of the fridge and sliced up a nectarine (the fuzzless peach!). I was pleasantly surprised when the salad turned out to be the best part of dinner, the smoky bitterness of arugula playing counterpoint to the summery sweet nectarine. Don't you just love it when things work out so well?

If I had a red onion around, I would have added a few thin slices for color and bite.

Cut or tear the arugula into bite size pieces and put them in a bowl. Slice the nectarine into wedges onto the arugula, then dress it with a splash of olive oil and a smaller splash of vinegar. Season the salad with a hearty pinch of salt, and toss. Divide the salad on two plates and top each with goat cheese crumbles.
Posted by Adrienne at 11:39 AM No comments: 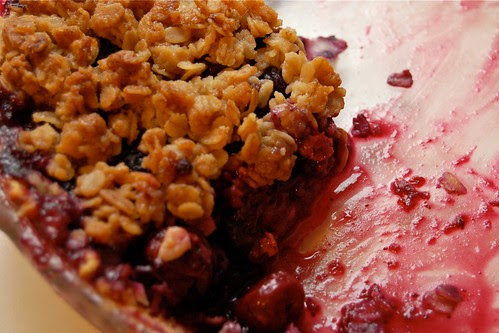 But wait, what's in it? All de berries.


This is totally my friend Kate's joke, and it's significantly more effective when told in a Vermont accent. This particular pie contained blueberries, raspberries, sour cherries, and blackberries.
Posted by Adrienne at 1:11 PM 1 comment: 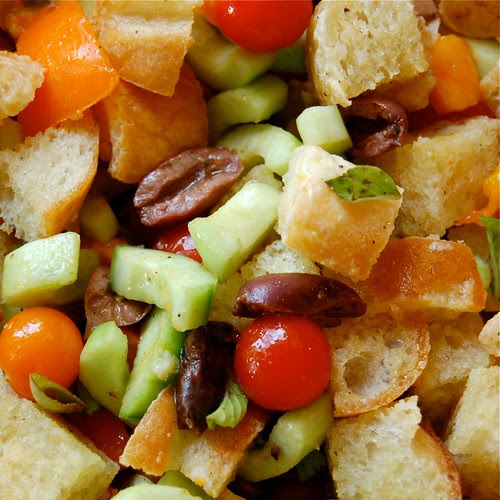 Apparently I have been using the word scrounge incorrectly. There's no begging or mooching involved for me; I've been saying I could "scrounge something up" for dinner when I guess what I really meant was more along the lines of "rustle up some grub" or "throw something together." But you know the kind of cooking I mean, right? Not so much cooking as assembling, easy to put together meals that are perfect for hot summer nights. A couple of tomatoes, a cucumber and some bread: boom! Dinner.

My loaf of bread wasn't stale, so I made it into garlic croutons, but the idea is to use hard, neglected bread that softens up in the bowl with juicy tomatoes and olive oil. At its heart, panzanella is a way to use leftovers and what's ripe in the garden right this minute, but I scrounged rustled up chose to add olives for their briny bite and a splash of white wine vinegar for punch.

Panzanella Salad
serves 2 as a light dinner, probably 4 as a side

Olives aren't traditional in panzanella, but I had a few in the fridge so I I had some time, so I made and used garlic oil, but plain olive oil is traditional and equally delicious.

If you have the time or inclination to get a little fancy, make garlic oil: peel 5 or 6 cloves of garlic and put them in a small pot. Add a cup of olive oil (you'll only use about half of this in the salad, but who doesn't like having garlic oil around?). Put the pot over the lowest heat your stove can manage for 15 minutes or so. Some bubbles will form around the garlic and it may simmer but it should never boil or even come close to boiling. If it gets too bubbly, just shut it off and let it hang out. The longer it sits the more garlicky it gets, but you can use it as soon as it has cooled.

Toss the bread cubes with a couple tablespoons of garlic oil (or plain olive oil) and a big pinch of salt on a baking sheet and stick them in a 350 degree oven, tossing occasionally, for about 15 minutes or until the cubes are crunchy but still a little soft in the middle. Let cool.

Cut the big tomatoes into chunks and remove the seedy goo. Cherry tomatoes can be left whole. Put the tomatoes, cucumbers, olives,  and basil in a big bowl and season with a big pinch of salt and a few turns of the pepper grinder, toss to combine. Add the bread cubes on top and drizzle 1/4 - 1/2 a cup of olive oil and a tablespoon of white wine vinegar over the whole thing (make sure to get a little bit down the sides of the bowl). Toss well and let the salad sit for as long as you have, 20-30 minutes is plenty but you can leave it for a few hours if you want. Don't put it in the fridge though, or the tomatoes will get mushy. Just before serving, toss again and taste it, add more oil or vinegar or salt or pepper if you think it needs it.
Posted by Adrienne at 1:26 PM 4 comments: 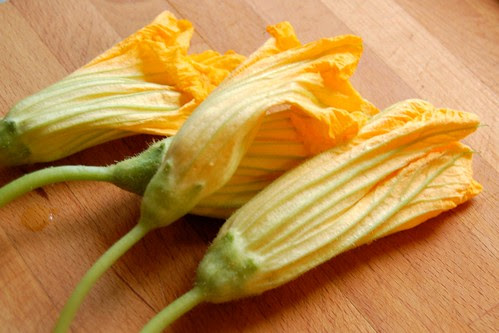 I was going to tell you about bread today since the weather has finally cooled off a bit, and I've got a loaf in the oven right now. BUT. Squash blossoms are in season. I saw them Monday at the Central Square farmer's market and I'm sure there are a couple of weeks left, but guys... it's August. 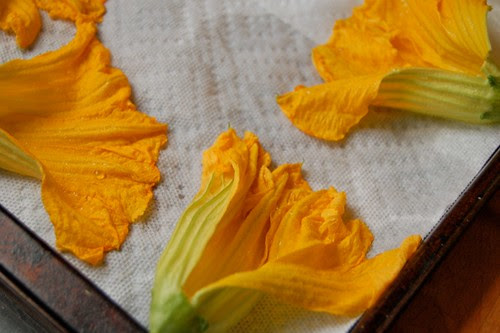 August, meaning that it'll be September before we know it, meaning that we must gorge ourselves on summer food now, while we still can! What are you guys wolfing down right now? Corn? Tomatoes? Peaches? 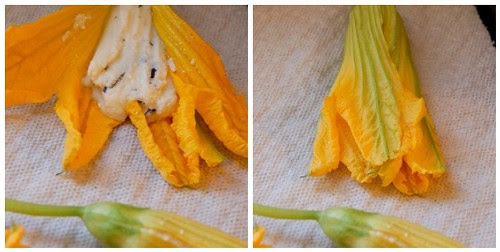 You might consider adding squash blossoms to the list. The most popular way to eat them is to stuff them with something tasty and fry 'em up, which is precisely what I did here. 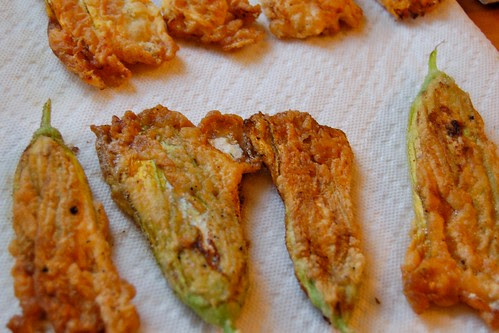 I did learn something cool from Zoe while I googled around on methods for stuffing and frying. You don't have to be so super careful not to rip the petals when you're cutting out the stamens, you just have to be deliberate and only tear it in one place. Then you can fold the flap over the filling and the coating will seal it shut in the frying oil. No need to twist it shut for round cylinders, flat things are easier to fry in less oil, anyway. 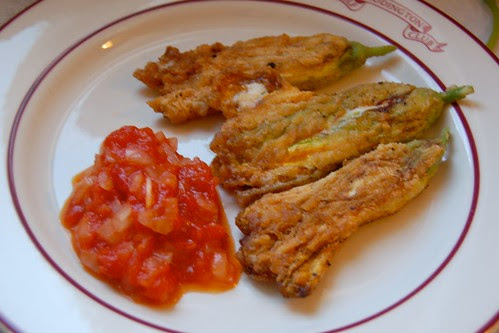 Stuffed Fried Squash Blossoms
serves 4 as a light meal (we had salad, too)

I served these with a simple tomato sauce: finely chop a small onion, sweat in a bit of olive oil, add a minced clove of garlic, then add a 15 ounce can of crushed tomatoes - I used the very last pint jar of home canned from 2010 - and simmer until thick. Add herbs (basil, oregano, marjoram) if you have them around.

First, prep the blossoms: remove the calyxes (little green leafy things) from the base of the flower. Slit the petal in one spot all the way down to the green part and carefully cut out the stamen. Carefully swish the flower in the water and lay it, open, on paper towels to dry. Repeat with all the blossoms and allow them to dry.

Meanwhile, get the filling ready. Mix up the ricotta with the herbs and some salt and pepper. Taste it, make sure it's good. Once the blossoms are dry, pipe or spoon in a small amount of filling into each flower. Don't overstuff! It'll just leak out and make frying more difficult. Fold the flap over the cheese.

Beat the egg in a shallow bowl until well blended, season with a little salt and pepper. In another shallow bowl season the flour, too. In a heavy skillet, heat about an 1/8 of an inch of oil over medium-high heat. The oil is hot enough when a pinch of flour dropped in sizzles immediately. One at a time, carefully dip each filled flower in the egg, letting the excess drip off, and then into the seasoned flour, patting off excess flower so the coating is light, not clumpy. Fry until golden, a few minutes on each side, then drain on paper towels. Don't eat them right out of the pan or you'll burn your mouth on the hot cheese, make sure to give them a minute!
Posted by Adrienne at 11:53 AM 3 comments: 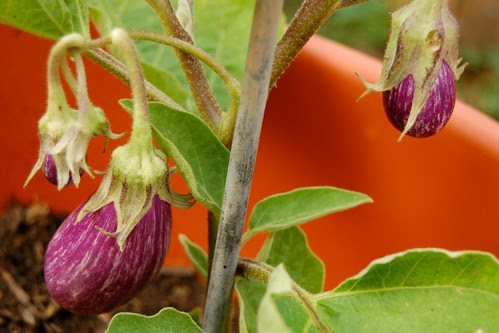 I did it! I successfully grew an eggplant! Three of them! Aren't they just the cutest little buggers? This variety is called Fairytale, and they are quite wee as far as eggplants go, growing not much bigger than 4 inches long (that middle one is nearly ready to harvest, in fact). As a bonus, the flowers are beautiful.
Posted by Adrienne at 7:01 PM No comments: