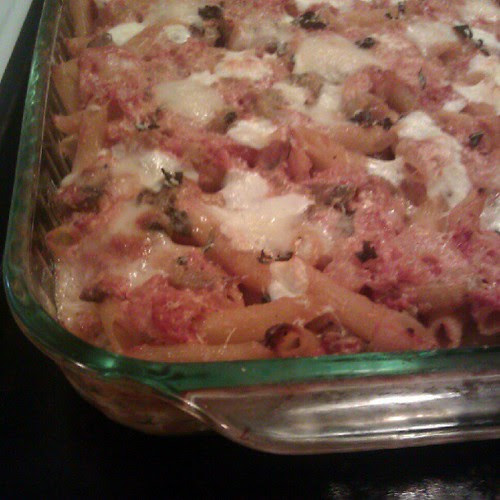 I know I've fallen out of the swing of things around here, but how about I skip the apologies for my absence (the usual summer fun distracted me, and then I started a new job, woo!) and instead I offer you this baked ziti. Yesterday after our weekend house guests left for the airport and we put together some awesome new furniture, I found myself on the couch with WGBH on the TV. And Lidia was on. I've never actually watched Lidia before, but she was making baked ziti and it looked good. Like really really good. Like go buy a box of pasta and some cheese and get that in the oven. So tonight we had baked ziti. And when I took that mediocre picture up there and put it on facebook, somebody asked for the recipe (Hi, Maura!), so I figured that was as good a reason as any to get back here. Buon appetito!

1 pound ziti (or penne or some other tubular pasta)
3-4 tablespoons olive oil
1 large onion, diced
4-5 cloves garlic, minced
1 lb skinny eggplants, peeled and cut into 1/2 inch chunks
1 32 oz can crushed tomatoes (or a quart of home canned if you've got 'em)
1 cup whole milk ricotta
5 ounces sharp provolone cheese, diced small
3 ounces fresh mozzarella, diced small (I used a generous half of a standard mozzarella ball)
parmesan cheese and/or pecorino romano, grated, as needed (I had both so I used them, one or the other is fine)
fresh basil, torn, if you've got it - I used about two tablespoons
salt and pepper

Bring a large pot of water to a boil and salt it generously.

While the water comes up to a boil, heat the olive oil in your largest skillet over medium heat and add the onion, cook until translucent (5-10 minutes depending on your heat level), then add the garlic. After about a minute, move the onion and garlic to the sides of the pan, then add the eggplant. It's going to look like a lot of food. Now's a good time to season it with salt and pepper. Cook, stirring occasionally, until the eggplant is soft. Add the tomatoes and stir, then bring to a simmer and cook until it's not watery anymore.

The sauce should thicken fairly quickly if you've got it in a nice wide skillet, so drop the pasta into the boiling water and cook for 2 minutes less than it says on the box (you'll be cooking it further in the oven so undercooking it a touch here keeps it from being soggy).

Spread half the pasta on the bottom of the baking dish, sprinkle half the cubed provolone and half the cubed mozzarella over it, then grate some pecorino and parmesan over it, then sprinkle with half your basil, if using.. Repeat with another layer of pasta, provolone and mozzarella and basil, spoon the rest of the sauce evenly over the top, then grate some parmesan and/or pecorino over the whole thing. Go ahead and be generous, here, you deserve it.

Put the baking dish in the oven and bake until lightly browned on top and bubbly, about 40 minutes, rotating halfway through. Let it sit for 5-10 minutes after it comes out of the oven so it can set up and you don't burn your mouth.