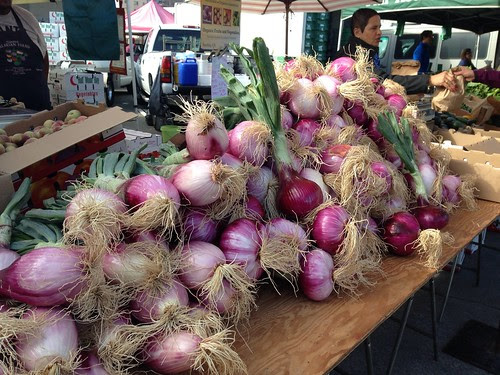 Only to have a grief
equal to all these tears!

There's not a sob in my chest.
Dry-hearted as Peer Gynt

I pare away, no hero,
merely a cook.

Crying was labor, once
when I'd good cause.
Walking, I felt my eyes like wounds
raw in my head,
so postal-clerks, I thought, must stare.
A dog's look, a cat's, burnt to my brain -
yet all that stayed
stuffed in my lungs like smog.

These old tears in the chopping-bowl.

This seemed appropriate for a dreary, grey Friday.  I took the photo on our trip to California in May; it's from the Santa Monica Farmer's Market. I hope your cooking projects this weekend only bring tears to your eyes with their sheer deliciousness!
Posted by Adrienne at 9:59 AM No comments: 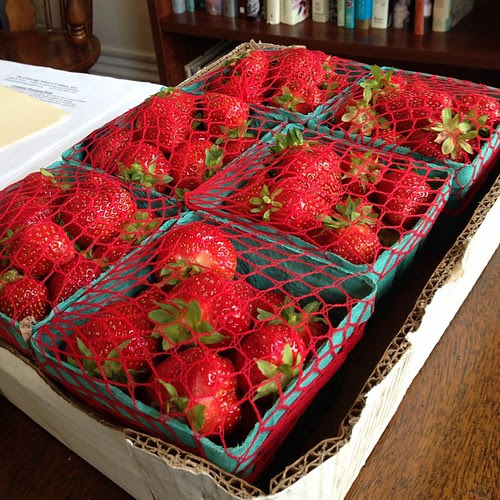 If we are facebook friends you might have noticed my rant when my well-intentioned landlady picked a bunch of my strawberries "so the animals don't get them!" Unfortunately, they weren't ripe yet, and they don't ripen once they've been picked. She also washed them (and I just keep telling myself she meant well, sigh), which meant they needed to be used immediately before they started to mold, but what do you do with under ripe strawberries? Well, not much. I ate the borderline ones and chucked the rest. It was so sad. But then a very nice chef instructor friend of mine bought me half a flat of strawberries from his CSA farm, becuase he is a very nice friend who understand the indignity of misappropriated fruit. Man, my office smelled good that day. With half of the berries I made this frozen strawberry pie from A Year of Pies, which I got as a Christmas gift from my mother-in-law. 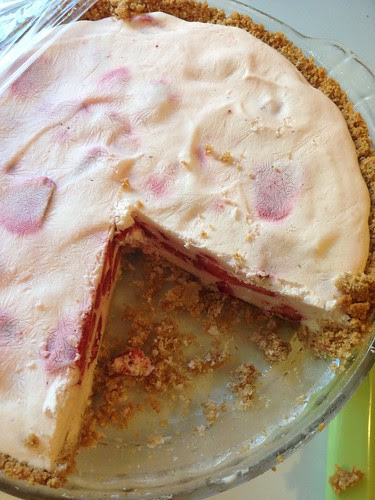 Though challenging to slice (leave it out on the counter for 20 minutes to soften, but expect that the bottom crust will crumble anyway), it's been a perfect dessert in the heatwave we're experiencing this week. I wasn't sure what to do with the rest of the berries, since I've still got a couple jars of last year's jam in the cupboard, but this simple recipe for compote (a much looser preserve) seemed intriguing. 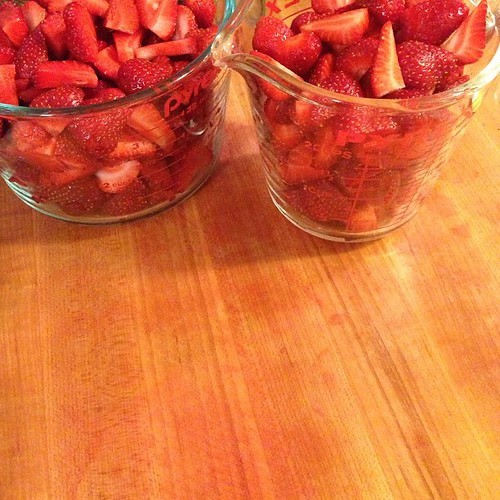 So I chopped up the rest of the berries, leaving my cutting board stained pink. After an over night maceration (apparently macerating helps the berries keep their shape better in the finished product, but mostly it was just too late for me to keep going!), I cooked and canned this vibrantly colored sauce. From a generous 6 cups of sliced fruit, I ended up with 4 half pint jars and a little bit leftover, which I ate on vanilla yogurt as a late night snack yesterday. 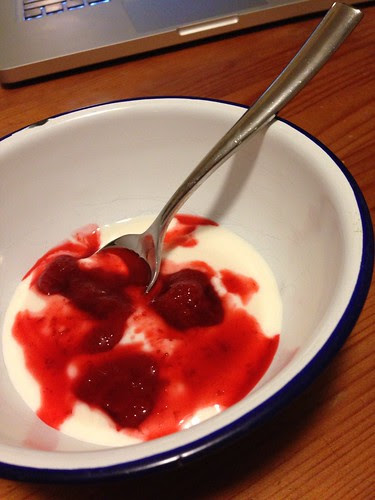 This compote is tangy from the lime juice and just sweet enough. Since there's not nearly as much sugar as in jam, I'm guessing the shelf life is going to be shorter, so I'm planning to eat this within 6 months, and not just on yogurt. Soon I will upgrade to ice cream, and I'm guessing waffles or pancakes or shortcakes aren't far behind.

Combine all ingredients in a bowl, mix well, and let macerate overnight in the fridge or for up to 48 hours. When you're ready to cook, get the boiling water bath canner and your jars ready, and then move the fruit, which should now be swimming in delightful red juice, into a 3-4 quart pot (if you won't need it in the meantime, you could macerate directly in the pot). Bring to a boil, stirring to avoid scorching, then lower the heat to maintain a simmer (keep stirring occasionally) and cook until slightly reduced and thickened. In my pot, this took about 30 minutes. Ladle compote into hot jars, wipe rims, apply lids and rings, and process for 10 minutes in a boiling water bath canner. Shut off the heat after 10 minutes and allow the jars to sit in the water bath for one additional minute, then remove to a towel lined counter. Check seals after 1 hour, then allow to cool completely before labeling and storing.
Posted by Adrienne at 4:18 PM 1 comment:

At the beginning of May Adam and I took a two week trip to California. You can see all the photos here. One thing that's different about previous trips we've taken is that I didn't bring my DSLR camera, I only brought my iPhone. There's certainly a noticeable difference in quality, but the trade off was that I didn't have to carry a big camera. I'm not ready to give up my camera entirely, but it was nice not to worry about another electronic something or other. Anyway, here are a few of my favorite shots: 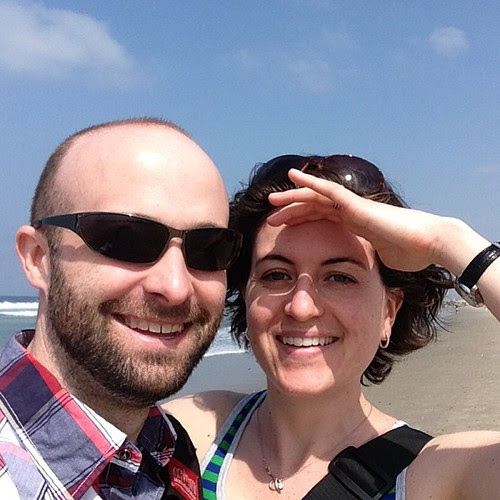 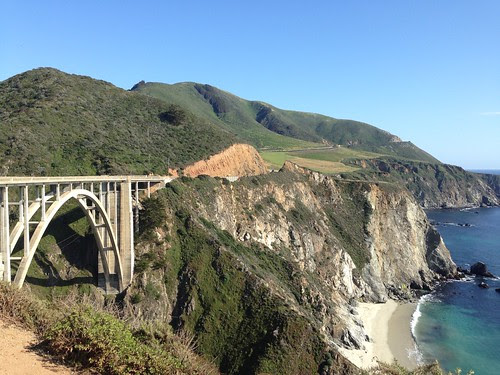 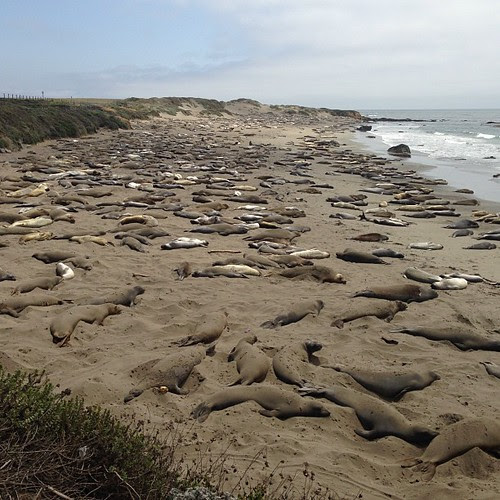 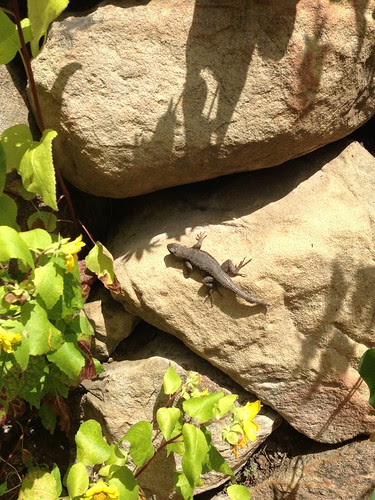 We got back a month ago, but I already can't wait to go back. Since then, we've had a lovely visit from family, including this little heartbreaker, who I only have blurry photos of, because he is in constant motion. 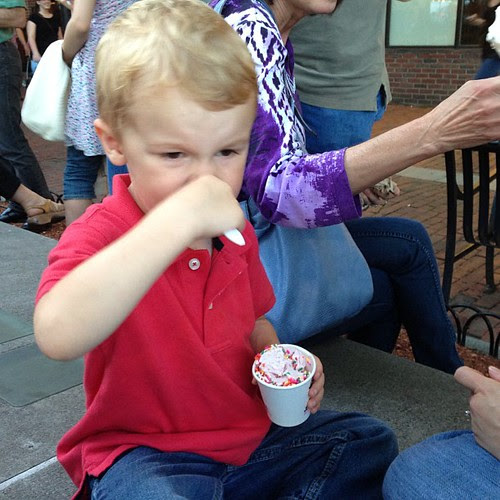 That was the day we had donuts for breakfast and ice cream for dinner in an attempt to show the whole family the best that Somerville has to offer. Yeah, I think he enjoyed himself.

After a bout of kitchen malaise when we got back from California (where are MY 8 for a dollar avocados?!), I've been finding my way back to cooking in the last few weeks. I made these excellent muffins (mmm, molasses and raisins), and there are three jars of rhubarb rosemary jam on my counter waiting to be labeled. Last week I threw together a pistachio chimichurri and we've eaten it on fish, beef, eggs, pizza and grilled veggies: one bunch of parsley, one bunch of cilantro, a couple stalks of spring garlic (or a clove or two of mature garlic) 1/3-1/2 cup of roasted pistachios, salt and enough olive oil to make it as loose as you like it. Chop the pistachios in the food processor, then add the herbs, and pour in the oil while the machine runs. Use it on just about anything (my favorite was on grilled steak).

Farmer's markets have been open for a couple of weeks, and our garden is in bloom, now too. The tomatoes are starting to flower, and I've been able to use the chive blossoms to pretty up salads of local greens and baby tomatoes - even if the avocados are $2 a piece and come from across the country.

What have you all been up to? What's cooking with you?
Posted by Adrienne at 10:27 AM No comments: