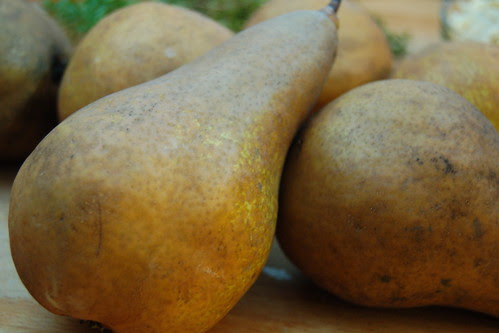 I've made this Pear, Port and Thyme conserve twice now, but I still can't get over the name. Not of this one, specifically, but of conserve. Don't you just want to Frohnchify it? No not French, FRONCH. It's different. CooohnSEEEERVh. COHNseehve. Coh-hon-hon-hooon sehhhh heh heh hehVE.  I can't figure out where the emphasis goes. 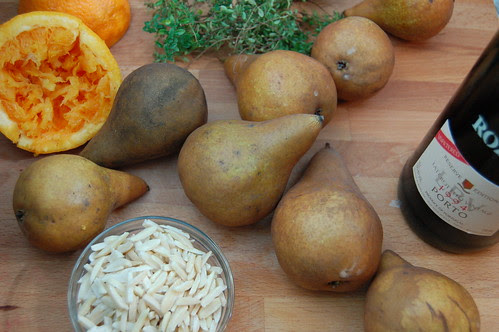 What I have figured out is where this sweet and aromatic condiment goes: IN MY BELLY. Like I said, I've made it twice. The first time I got five half-pint jars out of it, but the second time I only got four... partly because I used slightly fewer pears and partly because I ate so much while it was cooking.

This recipe is from Eugenia Bone's book Well Preserved, though I've made a couple of changes. I'll be bringing it with me to a Canvolution event in Boston, the focus of which is a preserve swap (!) in a few weeks. If you don't want to can the conserve, you could cut the recipe in half to a more usable amount and store it in the fridge. According to the recipes that follow in the book, this stuff is good with squash and veal and in gingerbread, but I also gave a jar to a friend who used it as a sauce with a pork tenderloin and said it was a big hit, and I suspect it would go well with cheese and crackers. However you use it, if you figure out how to pronounce it, will you please let me know? 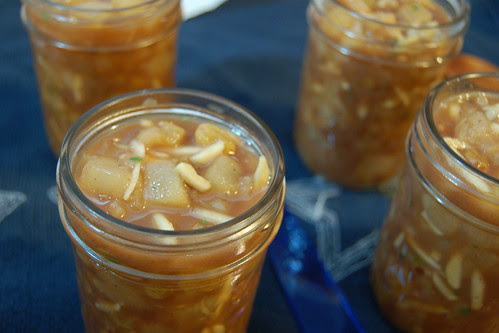 So it turns out a conserve is defined by the presence of raisins and nuts. This one calls for slivered almonds and golden raisins, but if you only have the regular purple kind I don't think it will make much difference flavor-wise. It may affect the color.

1/2 teaspoon ground ginger (the spice powder, not the root)

3 pounds Bosc or Anjou pears, peeled, cored and coarsely chopped (they don't break down much so don't leave any huge chunks)

Note: Total amount of juice is 3/4 cup. When I juiced one orange and only got between 1/3 and half a cup of juice, not the full 1/2 cup called for, I just poured bottled lemon juice in until I hit the 3/4 cup mark. I like acidity though, and I didn't have a backup orange.

If you're planning to hot-water-bath can these*, bring a large pot of water to a boil with a rack on the bottom of the pot. I usually put my empty jars (without the lids) in the rack while the water comes up to temperature, that way they've been sterilized by the time the preserve is cooked and ready to be canned. Heat the lids in a small pot of simmering (not boiling) water to soften the flange.

Combine the raisins, brown sugar, orange and lemon juices, lemon zest, cinnamon, nutmeg, ginger and salt in a large pot over medium high -heat. Stir to dissolve the sugar while the mixture comes up to a boil. Add the pears, lower the heat, and cover the pot. Let it simmer on low for 15 minutes. Remove the cover so it starts to thicken up, and cook another 15 minutes, stirring occasionally.

Add the almonds, port and thyme, and stir to combine. Once heated through, fill the jars, leaving 1/2 inch of head space, clean the rims then apply the simmered lids, and the rings to finger-tight. Put the filled jars on the rack in the pot (make sure they're covered by 2-3 inches of water) and process for 20 minutes (start counting once the water comes up to a boil). After 20 minutes, shut off the heat, but leave the jars in the water for five more minutes. Remove to the counter and let cool undisturbed for 6 hours.

*Precise, exlicit instructions for water bath preserving are available from Canning Across America or the National Center for Home Food Preservation. The Ball Blue Book of Preserving is also a great basic resource for methods and recipes.
Posted by Adrienne at 9:00 AM