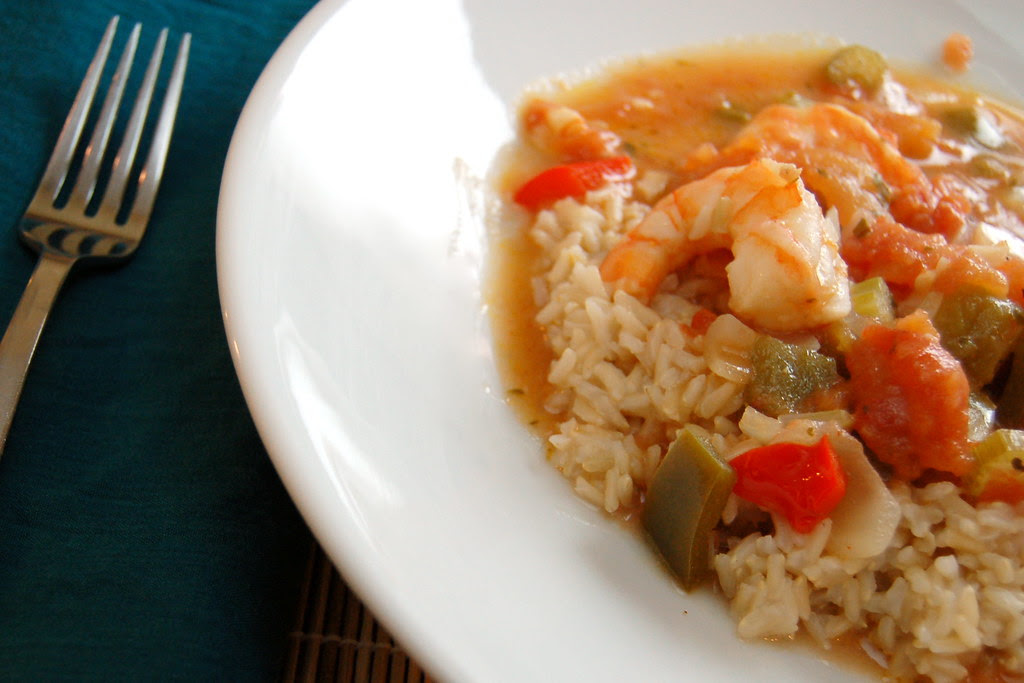 So you may have heard there's a big football game tonight. One of the teams has never actually made it to the Super Bowl, so it's a pretty big deal for them. I like that, the underdog story, and I guess I'm a little bit hoping the Saints take it home today. On the other hand, I think Peyton Manning is pretty hilarious -not on the field, then he's just sort of annoying, what with all the finger licking and beating the Patriots- but in those Sony ads with Justin Timberlake.

When my team's not playing, I usually watch the game anyway, but today happens to be my birthday (the big 2-7, whooop!) and we're going out to dinner. That's why I don't have a Super Bowl Snacks! post for you today. Instead, I bring you the humble gumbo. It starts with a proper roux, fat and flour cooked together to bring out the best of both, then the addition of the holy trinity of celery, bell pepper and onion. Add a little stock, some chopped tomatoes and a healthy dose of cayenne pepper, toss in a few quick-cooking shrimp at the end, and serve the whole thing over rice. Bam! (sorry) you've got yourself one heck of a meal.

Mr. Bittman made his gumbo this week with scallops, but I had shrimp in the freezer. I also used marjoram instead of oregano because (you guessed it) that's what I had.

1/4 cup olive oil
2 tablespoons butter
1/3 cup flour
1 onion, chopped
1 green bell pepper, chopped (I added half a red pepper because... I had one in the fridge)
2 celery stalks, chopped
2 tablespoons minced garlic
Salt and black pepper
2 to 3 cups vegetable or chicken stock, or water
2 cups chopped tomatoes with their juice (canned are fine)
1 tablespoon fresh thyme, or 1 teaspoon dried
1 tablespoon fresh marjoram, or 1 teaspoon dried (use oregano if that's what you have)
2 bay leaves
Cayenne to taste (start with a scant 1/4 teaspoon, go up from there)
1 pound shrimp, shelled and de-veined

In a dutch oven or other heavy pot, melt the butter and oil together over medium heat. When the butter is melted, add the flour by sprinkling or sifting it over the surface of the fat. Start stirring, and keep stirring for 15-20 minutes until it starts to smell nutty and darkens in color. There are those who would say it's not a true roux if it's not chestnut brown, but I say oh shush, this smells awesome. You may  have to adjust the heat a little lower to keep the roux from burning. Add the onions, celery, and bell pepper, season with salt and pepper and cook another ten minutes until the vegetables have softened.

Add the stock, tomatoes, thyme, marjoram, bay leaves and cayenne pepper, bring to a boil, then reduce the heat so the gumbo simmers. Allow to simmer, uncovered, stirring occasionally, for about 20 minutes until the gumbo thickens and reduces slightly. Taste for seasoning (you may need more cayenne). Add the shrimp, and give them a couple of minutes to cook through. Turn off the heat, remove the bay leaves, and serve the gumbo over rice.
Posted by Adrienne at 5:03 PM