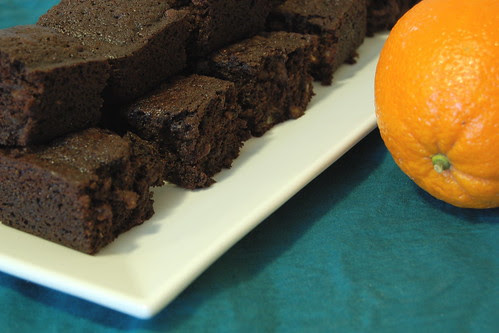 Do you remember Terry's Chocolate Orange? This UK import is most popular in the states around the holidays, when I think it's supposed to evoke some prehistoric memory of when an orange in your stocking was a highly coveted prize from the man in red. In case you've never seen one, it's a spherical milk chocolate confection flavored with orange oil and separated into segments in the style of an actual orange. To eat one, you follow the directions on the label: whack and unwrap! Give the butt of the faux-range a solid thwack on the table, then peel off the foil. If you've hit it right, the segments will fall away from each other in 20 identical pieces for you to share with 19 friends or to savor over the course of 20 days or, let's be serious, to eat all at once in front of an Ab Fab marathon.


The one and only time I had a Chocolate Orange of my own was at least 10 years ago. I don't remember where it came from, but I do remember sitting in my high school drama coach's classrom and giving the orange a timid tap on the desk in front of me. Someone told me I had to hit it harder, and when I did, the whole thing shattered instead of separating neatly. It was so traumatizing I never had another one.

Ok, not really. I mean, it was not traumatizing, but I haven't eaten a Chocolate Orange since high school - that part's no joke. Given that it's been so long since I've eaten one, I'm not sure why this recipe in the letters section at the beginning of this month's Bon Appetit caught my eye the way it did, but boy am I glad it did. These brownies are cakey, not fudgey which is my usual preference, but they pack a real whallop of orange flavor, and it sets off the bitterness of the natural unsweetened cocoa powder quite nicely. The chopped toasted pecans add an interesting texture, but if you're nut sensitive or just out of pecans, chocolate chips would make a nice substitute, or you could just skip the textural bits all together.

Preheat the oven to 350˚. Melt the butter so it has time to cool off while you  prepare the rest of the ingredients.

Spray an 8x8 or 9x9 square metal baking pan with 2 inch sides with nonstick spray. (I used 8x8 and I had to adjust the baking time up by a few minutes; the recipe is written for a 9x9 pan but I don't have one of those.)

Whisk the 1/2 cup hot water with the cocoa powder in a small bowl (I used the same mug I microwaved the water in). In a medium bowl, whisk together the flour, brown sugar, baking bowder, baking soda and salt until they are well combined. Stir in the pecans. Whisk the eggs in a large bowl, then add the butter, orange zest and vanilla and whisk to combine. Whisk in the cocoa mixture. (While you're adding the warm things - the butter and cocoa mixture - make sure you add them slowly while whisking, so the heat doesn't scramble the eggs.) Add flour mixture, switch to a spatula or spoon and stir just until the flour disappears - don't overmix it.

Pour the batter into the oiled pan, and bake in the center of the oven, turning once for even baking, for 30 minutes. If using an 8x8 pan they may require another 2 minutes or so. A toothpick or small knife inserted in the center should have a couple of small crumbs attached. Cool the brownies completely in the pan on a cooling rack, then cut into 16 squares and enjoy.
Posted by Adrienne at 7:51 AM