Spring Salmon with Peas and Asparagus 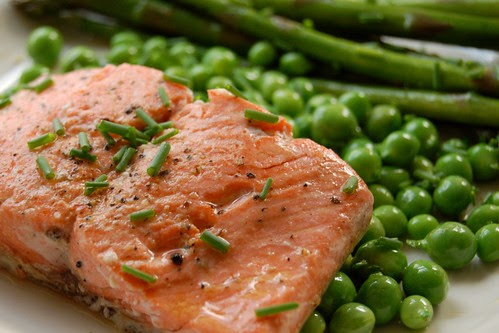 The weather here in Boston has been so darn springy lately (78 and sunny for the last week!) that green vegetables are the only thing I want to eat. Add in a trip to Wilson Farms in Lexington where I was able to get asparagus so local I could feasibly ride a bike to where it grows, and ta-da! More asparagus, right after I told you about my old standby pasta and asparagus. And you know what? I've got another asparagus recipe on deck. I know it's a little bit crazy, but it's so GOOD this time of year; asparagus in November is not the same at all. I will gorge myself now instead of eating crappy spears in six months.

I blanched a couple of bunches for another project (aforementioned on deck asparagus recipe) but only ended up using about a bunch and a half. Just bring a pan of water to a boil, add the asparagus (woody ends snapped off), and cook for 15-60 seconds. Fifteen seconds is enough if it's pencil thin and you like it crunchy, a full minute is good if you want it more cooked. The big thick stalks will need to cook for longer to become tender. Then remove the asparagus with tongs or a slotted spoon and put it directly into a bowl of ice water to stop the cooking. You can do this a couple days in advance if you want, and keep the cooked asparagus in the fridge.

You could use frozen peas if you wanted to, but freshly shelled English peas (also called shelling peas or garden peas) are a real treat and not THAT much work. Snap off the blossom end of the pea, and "unzip" it by pulling off the string along the seam. Open the pod, and slide your fingers down the inside to remove the peas. Do this over a bowl, because peas are very bouncy. Enlist a helper and you can get through a pound or two in a flash. Alone, it only took me about 8 minutes to shell a pound.

Update! The latest Spilled Milk podcast is about peas, and it is hilarious. Go listen.
Spring Salmon with Peas and Asparagus
Serves 2, but easily doubled. Buy more shelling peas than you think you will need, because a pound of pea pods yields scarcely a cup of actual peas.

Salt and pepper the flesh side of the salmon pieces (it's easy enough to remove the skin once the salmon is cooked, so for simple preparations like this I just leave it on during cooking). Heat a tablespoon of butter in a large nonstick skillet over medium-high heat until it melts and foams, then add the the salmon, skin side up. Allow to cook without moving for about 3 minutes, until you can see that it is approximately half way cooked - take a peek at the side, it will be starting to get opaque.

Flip the salmon over. Cook for another 2-3 minutes, until the sides are just opaque all the way through. The center will be a touch under cooked, but it's going to rest for a couple of minutes so it will carry over until it's just done. Also, cooking pricey wild caught salmon until it's dry as a bone is a crime. Remove the salmon to a plate and cover very loosely with aluminum foil.

Don't clean the pan, just add another tablespoon of butter, let it melt, then add the peas and asparagus. The peas will cook in less than a minute - they'll still be sort of al dente, but mushy peas are gross. You're just warming up the asparagus. Salt and pepper the vegetables and when they are warm and the peas are cooked to your liking, remove to two plates. If there are any accumulated juices in the pan, pour these over the veg, then add a piece of salmon to each plate. Sprinkle chopped chives over if you want to make it pretty.
Posted by Adrienne at 10:07 AM