Curried Parsnips with Yogurt and Chutney 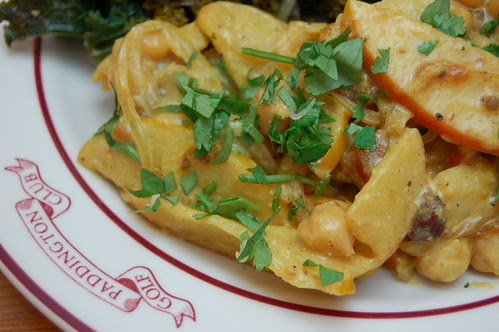 Wow, I really went ahead and fell off the face of the planet there, didn't I? Whooops! It's almost like I had some sort of enormous thing happen that has left me distracted and perusing a whole new world of blogs this week.


Maybe it's just me but when we got engaged I immediately thought, ah, I must now imbue every moment with elegance and dignity! I'm engaged to be married! It's a big deal! And now I can use italics and plan a big party! But then... just because a fantastic and romantic lifetime commitment has been made does not mean that we lounge around on pillows eating bon bons while the unicorns dance and fairies plan the wedding. We still have to eat.

And that's where Deborah Madison comes in. We are doing our best to keep our meat intake down lately (aside from delicious, gigantic rueben sandwiches while we wait for certain fancy pieces of jewelry to be re-sized), so I've been referencing Vegetarian Cooking for Everyone a lot in the last few weeks. I modified this stew to fit what I had in the house. I only had a pound of parsnips and only one apple, but I did have two cups of cooked chickpeas in the fridge, leftover from a previous soup.  If your parsnips are very large they may  have a woody core (you'll know, it'll feel tough against the knife). Cut that part out, then proceed, and enjoy. We ate this with some garlicky braised kale, but it would also be great with naan or rice.

Steam the parsnips in a steamer basket over simmering water for about 7 minutes until just tender.

Heat the butter or oil in a large skillet over medium heat, and saute the apples, onions and curry powder for ten minutes or so until the onions are translucent. Add the parsnips and chickpeas and season with salt and pepper, cook for a few minutes until everything is heated through.

Turn off the heat, then stir in the yogurt, cilantro and chutney, plate, and garnish with more cilantro if you like.
Posted by Adrienne at 7:37 PM