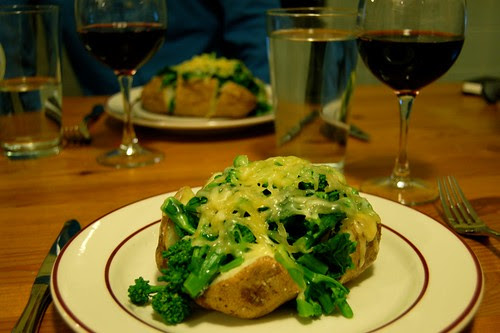 Last week at work we got to try raclette in the traditional way, heated up and scraped onto some potatoes, so it seemed an obvious choice to top this fancied up 'tater. Instead of broccoli and cheddar, why not broccoli rabe and raclette? The creamy nuttiness of the raclette stood up brilliantly to the bitter broccoli rabe.

So yeah, sometimes we have baked potatoes for dinner. I actually bought these potatoes because we had lots of leftover chili after the Superbowl and baked potatoes with chili is an aaawesome repurpose of leftovers. Except then Adam ate all the chili for lunch. (I mean, not in one day, just that he ate three days worth of chili lunch.) The point is that after all that chili, a big pile of vegetables is super appealing. Do you do baked potatoes for dinner, or just as a side? What's your favorite tater topper?

Baked Potatoes with Broccoli Rabe and Raclette
Serves 4
You don't have to use actual Swiss raclette if you can't find it, just something that style. I will say, however, that if you're having baked potatoes for dinner, springing for a fancy cheese is not a bad way to go. If you'd rather go domestic, Spring Brook Farm makes a great raclette style cheese.

Preheat your oven to 375. Put a baking sheet on the bottom shelf. Poke the potatoes all over with a fork, then rub them with a thin coat of vegetable oil and rub a generous amount of salt on the skin. Put the potatoes directly on the top rack of the oven. The baking sheet is there to catch any drips, and will probably be annoying to clean later, so you may want to put some foil on it first. After 30 minutes, turn the potatoes over. It should take 45 minutes to an hour for the potatoes to become tender all the way through (poke them with a thin knife to find out).

While the potatoes are baking, bring a large pot of salted water to boil. Blanch the broccoli rabe for 1-2 minutes or until tender. I spread it out on another cookie sheet to let it dry/cool  faster, but you could also shock it in ice water and drain it. I just used it as is, but if you wanted to saute the blanched broccoli rabe in butter to warm it up, that would be good too.

Grate the raclette as best you can on the large holes of a box grater. It will be a little smushy, but that's ok.

When the potatoes are done, open them up. I like to cut them open (not all the way through to the bottom) the long way, and then make 2 cuts the other way so I end up with six potato segements. Season the potato insides with salt and pepper, then top with the broccoli rabe and raclette. Put the topped potatoes on a baking sheet (the one that was in the oven or the one that had the broccoli rabe on it) and stick them in the still-warm oven for a few minutes until the cheese melts.
Posted by Adrienne at 2:06 PM