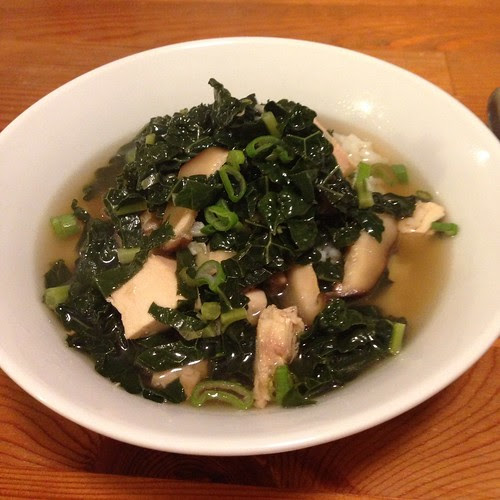 Sometimes I end up with leftover chicken. I bet you do, too. In fact, here's a little secret: whenever I roast a chicken for just the two of us, while we're eating... I'm already thinking about what I'm going to do with the leftovers. This time, I made soup, but I wasn't in the mood for classic chicken noodle. I know it doesn't look like much, but it's earthy from the mushrooms with a little bit of heat from the ginger and scallions, plus it's basically a bowl of kale, so hippies love it. Next time you've got a chicken carcass, don't trash it: make soup!


The broth takes an hour or two, so get that started before you prep the soup, ok? I usually carve the rest of the serving pieces off a carcass, then start the broth, then dice or shred the meat while the broth comes up to a boil. This makes more broth than you need for the soup, and if you don't have immediate chicken broth needs you can freeze the extra or keep it in the fridge for up to a week.

For the shitakes:
about 10 dried shitake mushrooms (approximately 1.5 ounces)

*Cutting the kale this way means you don't have to yank out the nice, nutritious stems - when you cut across the leaf the stems end up in small pieces that cook quickly and don't feel tough or fibrous in your mouth.

First, start the broth: carve or pick all the serving pieces and remaining meaty chunks off the chicken carcass, then stick it in a 6-8 quart pot. Cut the hairy end off the onion, then cut it in quarters (I cut it through the root for ease of fishing-it-out-later) and stick that in the pot. Add a couple of smashed garlic cloves and a few thick slices of ginger. Add water just to cover the carcass - it shouldn't float, but it shouldn't stick out - and bring it up to a boil, then back it down to a simmer and let it go for about an hour, or two if you have time.

While the broth simmers, put the shitakes in a heat proof bowl and add 2.5 cups of very hot water. Weigh the mushrooms down with a plate, if need be, to keep them submerged. They'll need at least 30 minutes to soften. When they're soft, lift them from the liquid (but don't dump it!). Use a sharp knife to trim off the stems, then thinly slice the caps. Add the stems to the simmering broth. Let the soaking liquid sit so any grit settles to the bottom, then carefully pour it into a clean measuring cup, leaving the sediment behind (or strain it through a fine mesh filter, if you prefer). You should have about 2 cups. NB: while the mushrooms soak is a good time to start cooking some white or brown rice - I use a cheap-o rice cooker that I got about 6 weeks ago and I reeeally like it. So nice to have the rice cooking over on the counter across the room instead of taking up space on the stove.

Just before you make the soup, strain the broth, or just ladle 4 cups of broth through a strainer into a bowl and deal with the rest of the broth after you eat.

To make the soup, heat the oil in a large pot (I use a 5 quart dutch oven... and I just realized it's basically the only pot I ever use for making soup. Huh.) over medium high heat. Add the scallions, garlic and ginger and saute for a minute or two, until the scallions soften up a bit and it starts to smell really good. Add a good pinch of salt, then add the 2-ish cups of mushroom soaking liquid. Add 4 cups of chicken broth, then add the kale and stir/poke the kale down under the liquid. Let the kale cook for a couple of minutes, then taste it to see if it's soft enough for you. Let it go a little longer if need be, then add the shitakes and chicken. Let them warm up, then season the soup with a splash of soy sauce (start with a teaspoon or two). Stir, then taste again. It might need a squeeze of lime juice or more soy. Once it's seasoned to your liking, serve it ladled over rice and sprinkled with the scallion tops. If you like spicy, feel free to add sriracha.