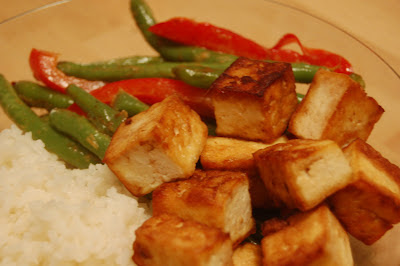 Mmmmm. So I was looking for a way to use that extremely delicious ginger miso dressing, and I thought green beans would be a nice vehicle. Also, I wanted some tofu, after reading about it on everybody likes sandwiches. As it turns out, pressing the tofu really does make a difference. I wrapped the block of tofu (TJ's extra firm) in a kitchen towel, put it on a plate, and popped the lid of my dutch oven on top (it's cast iron). Next time I'll use something heavier (like the base of the dutch oven) but I stacked some canned beans on top, too. Note- I was just too lazy to get the whole thing down; it's heavy. Which I suppose is the point. Anyway.

After a couple of hours I marinated the tofu in several tablespoons of soy sauce, some sesame oil (not more than 1/2 a teaspoon, that stuff is strong!) and some minced ginger for about 15 minutes. I heated up 2 tablespoons of vegetable oil (hot but not smoking) and added the cubed tofu. Am I supposed to call this a saute? Or a stir-fry? There's not much stirring, but there is careful turning with tongs. I like to get at least 3-4 sides crispy. Once the cubes are in place, don't move them until you're actually ready to turn them over, that way they can get golden brown and delicious.

I took the tofu out of the pan and added about a pound of trimmed and cleaned green beans and one sliced red bell pepper, and then covered it to let the whole thing steam a bit. Once the veggies were crisp-tender (stupidest cooking adjective ever, but exactly what you're going for) I took the pan off the heat and tossed them with a couple of tablespoons of the aforementioned Ginger Miso Dressing and served the whole shebang with jasmine rice. Yum. Very tasty and vegan, to boot!
Posted by Adrienne at 10:59 PM