On OUTRAGE! and soup. 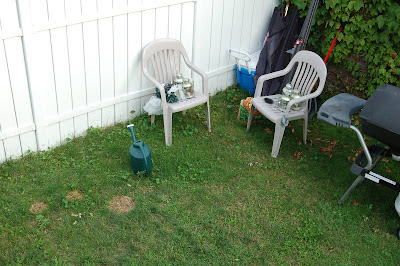 Dear reader, do you notice anything missing from this photo? Say, three bare spots where potted plants used to live? Three botanical babies, lovingly cared for by moi? *sigh* Someone stole two of my plants today. They had been moved down to the yard with all the other stuff you see by the guys refinishing the deck. I got home from work and headed around the back to water (the promised thundershowers did not show up today) and two of my three pots were missing. Including the beautiful raku pot I bought on clearance at the end of last summer. And someone has absconded with it! Not to mention the parsley, thyme, basil and tarragon living in it! And the rosemary in the green pot next to it. My mint in its mustard yellow pot was left. I watered it and brought it up on the porch, then I raged a little bit and yelled. And then I made soup. 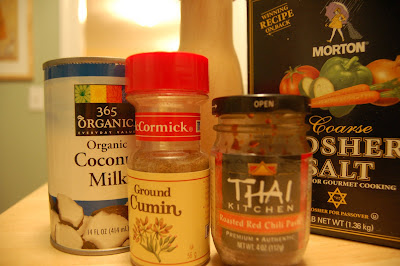 A couple of weeks ago in Maine, just before getting on the train back to Boston, we had lunch at Walter's, where I had not been before. They had a special of Coconut Split Pea Soup, and although my fish taco's were delicious (grilled fish, not fried, yum!) the soup was really a standout. 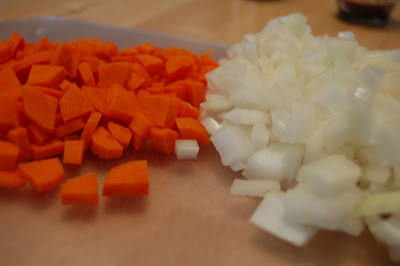 I knew I had half a bag of green split peas in the cupboard, so I picked up a can of coconut milk and two carrots, oooh about ten days ago. Those poor little carrots were languishing in the crisper drawer getting a little floppy, but after a crappy day and the herb heist, I decided it was time for a project. 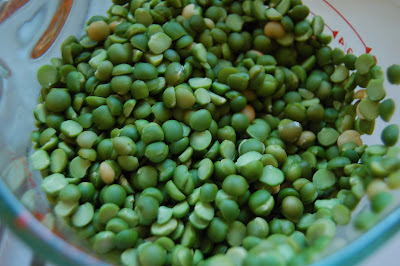 In the end I sauteed some shrimp, chopped it and served it on top of the soup, but it was absolutely delicious (and vegan) on its own. AND I didn't even have to blend it. Split peas get creamy on their own. Who knew? You know what would have looked nice on top of this? Parsley. Or maybe basil. Harumph. I hope you like this soup, too. 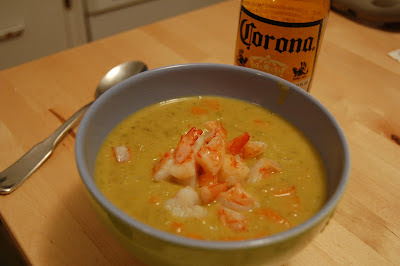 Coconut Split Pea Soup
inspired by a soup special at Walter's in Portland, ME

Optional:
Shrimp, peeled & deveined - I used five jumbos (size 24-28/lb) per bowl of soup - sauteed with a clove of minced garlic in a couple of tablespoons of olive oil.

In a large pot, heat a couple of tablespoons of olive oil over medium heat. Add the carrots, onions, and garlic and sweat a couple of minutes. Don't let them brown, just warm them up. Add a tablespoon or two of red chili paste. I used one, but I think next time I'll use two - there wasn't quite enough heat for me. Add the cumin.

Add the split peas and four cups of water. You could use vegetable or chicken stock here if you want; I started with 4 cups because I knew I would be adding more liquid at the end, but I had to add a cup of water when I turned the heat down. Bring to a boil for 2o-25 minutes. Add salt and pepper to taste (I used about a teaspoon and a half of salt and about 10 grinds of pepper), then turn the heat to low and simmer for another 20, stirring occasionally to avoid sticking to the bottom of the pot.

Fifteen minutes before the soup is done, stir in the can of coconut milk and taste the soup. Mine needed another hefty pinch of salt and more pepper.

If using, chop the shrimp and add it to the soup in each bowl. Slurp happily.