This past Saturday was a very busy day. Busy in the best way, though: TWO parties to attend! Three of Adam's friends were having a "house cooling" party since they are moving out of the apartment they've lived in for a few years. I had a bag of cherries left over from the photoshoot (oooh look how FANCY I am, I had a photoshoot), and I had never made a pie before. Knowing the girls' affinity for this particular baked good, I made a cherry pie, using a recipe from Deb of Smitten Kitchen. Look, a pie! 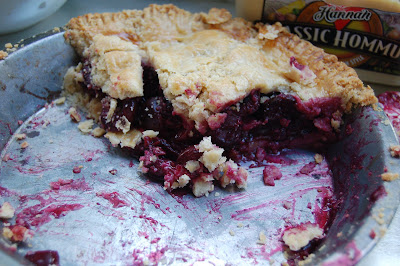 It was my first 'from scratch' pie and it was delicious.. but we're not here to talk about pie (sorry)! 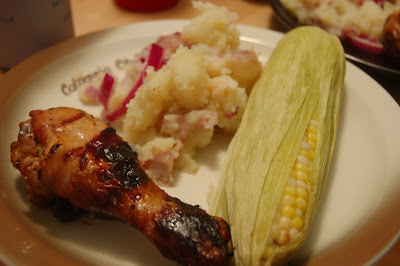 If you know me in real life, you know there are a couple of dishes I make regularly and get regular requests for. Particularly in the summer, aka season of barbecues/deck parties, and I've mentioned one of them before: Kathy Frontino's Potato Salad. In the photo above (from the first time I mentioned this delicious stuff), the potatoes are overcooked so it's not so pretty, but even mayo-phobes love this stuff, since it, um... doesn't have any mayonnaise in it. Anyway, we were sitting around the living room early last week talking about Tammi and Tom's housewarming party (party #2 on Saturday), and I volunteered to make this my contribution, since most people would be bringing... tequila. Yes.

The story behind how I learned this recipe involved 72 Bud Lights... and that's all I'm going to say on the subject. This is more of a method than a recipe, but you will need: 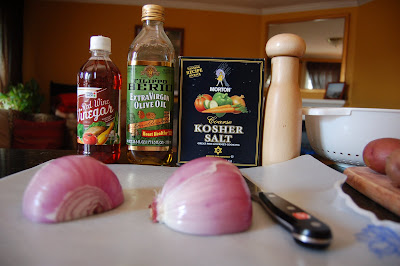 I borrowed a gigantic (too big, in fact) pot from T^2 and boiled up six pounds of red potatoes until I could easily stick them with a knife, but they didn't fall apart. That's only two bags, actually, but it SOUNDS like a lot. 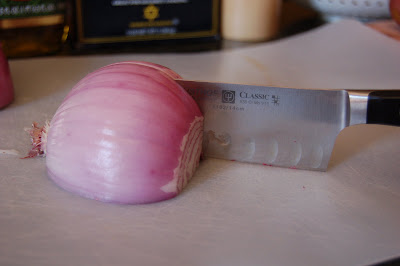 I cut up 1 1/2 red onions into very thin slices until I had a big pile... and then last night I looked for the other half an onion in the fridge and couldn't find it. Argh. Anyway... 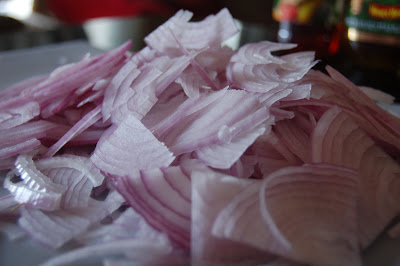 I cut the potatoes into bite-sized pieces. These happened to be pretty small so some only needed to be cut in half. 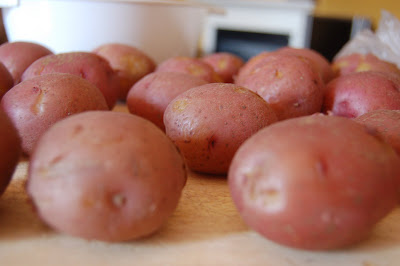 Then I started layering - it's important to build this dish in layers so each potato gets seasoned, and you only have to do minimal stirring at the end. 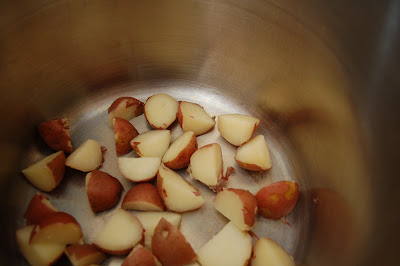 Start with potatoes, then onions. 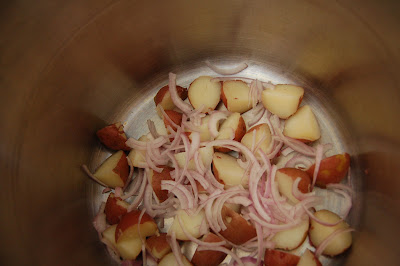 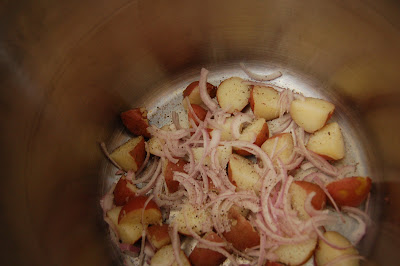 Then drizzle with vinegar and olive oil (it seems I forgot to photograph that step). I probably use about two tablespoons of vinegar and three to four tablespoons of oil per layer. In all I think I used about half a cup, maybe more, of oil. 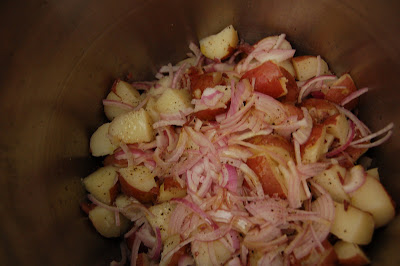 Continue to build your potato salad, adding and seasoning in layers. Give it a good but gentle stir to make sure each potato bite is glazed with olive oil and has a kick of the vinegar. Bring a vat to a party, and watch it disappear.
Posted by Adrienne at 7:05 AM