I made all of these things on the same day. Really.

Has it already been six days? Oh my goodness. What deliciousness I have to share with you! 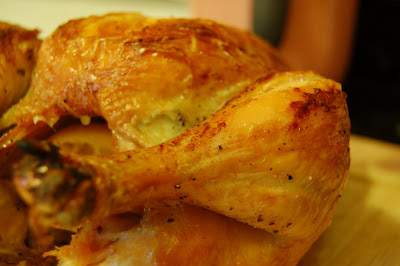 As you can see, last week I roasted a chicken. I used the Zuni Cafe method and there are many pages in the book dedicated to "the practice of salting early" which you can also read about over on Cooking Zuni (who I believe is working on the Zuni Roast Chicken Post also!). I cannot yet say that I turn to this book again and again, but there are some amazing ideas in here and I think salting early is one of them. I bought a 5 pound chicken last Sunday (bigger than her suggested 2-3 pounder, but the smallest I could find at my store), took it home, rinsed it off, and covered it with kosher salt and pepper. I made some holes under the skin in four spots and stuck some fresh thyme sprigs in (which you can sort of see in the next photo), then I stuck the whole chicken in the fridge. Yep. In the fridge for... twenty four hours. According to Judy I should have left such a big bird in there another day, but hey, I'm a rebel. 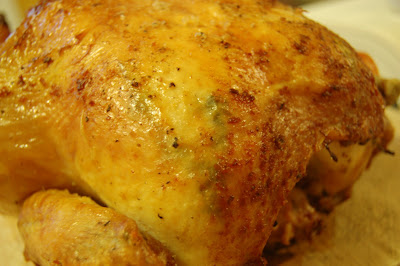 Anyway, I preheated the pan (I used an enameled cast iron dutch oven but I'll use something shallower next time) and preheated the oven and did the whole flip every half hour thing as directed. I'm not sure my bird got quite brown enough, frankly. Perhaps I'll go back to Alton Brown's method next time, or perhaps I should have turned up the heat a bit. The skin on this bird was aaabsolutely fantastic, and even a certain roommate of mine who "doesn't like chicken" thought it was great. In fact when I went back into the fridge the next day some of the leftovers had mysteriously disappeared. WEIRD. 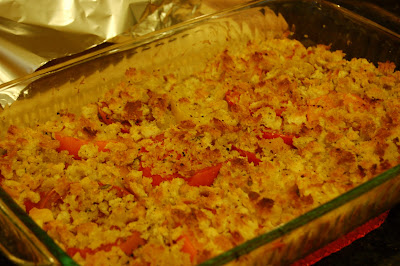 With the chicken we had this heirloom tomato casserole thingy. Can you call it a casserole when there are no eggs in it? Well, I used Noble Pig's recipe (on a smaller scale, though) and it was AWESOME. We had stopped up at the farmer's market at lunch that afternoon looking for impressive tomatoes and I liked the purple striped ones the best, they had a tremendously rich flavor. Maybe next time I'll learn what they're called. 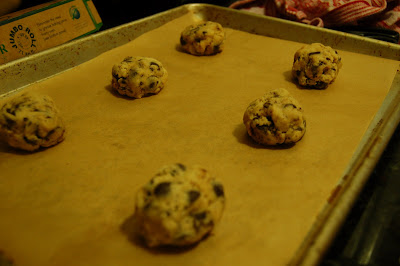 Oh, and also, I tried those famous Jacques Torres New York Times cookies. Meh. Perhaps it's because I used AP flour instead of the combo cake+bread flours or perhaps it's because I went by measure and not weight, but they were a little too crispy for me. I used Ghirardelli 60% chocolate chips and also chopped up a 3 oz bar of the same, which I think is where the color comes from. I WILL try them again, because the flavor was good, and the quest for the ideal chocolate chip cookie is a quest I can get down with, but until then, I have a ball of dough in my freezer... that recipe is HUGE. Anybody want a (giant) cookie? 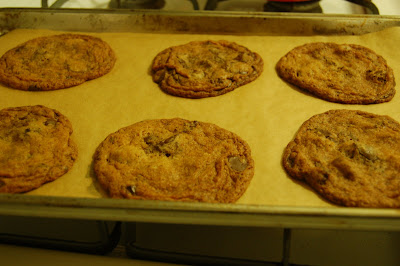