Flank Steak with Potato and Artichoke Hash and Aleppo Aioli 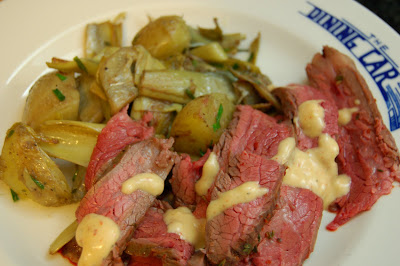 Apparently I'm on a meat kick. You haven't really seen it here because I've posted two meatless, brunch-y recipes in a row, but I have been eating burgers and Reubens and steak like it's my JOB this past week. And I'm usually such a vegetable girl! 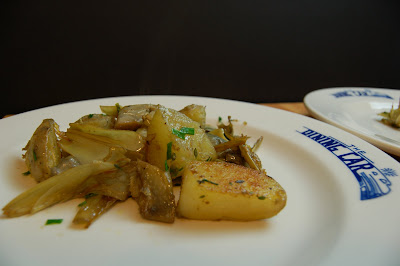 That said, I try to listen to my body when it tells me to eat certain things like greens or beef, because I tend to be borderline anemic. Red meat and leafy greens are the most delicious sources of iron I can think of! 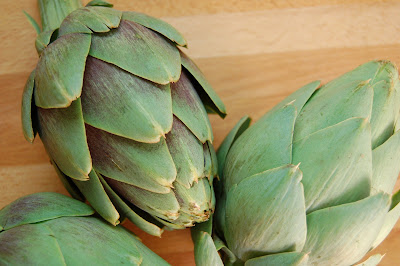 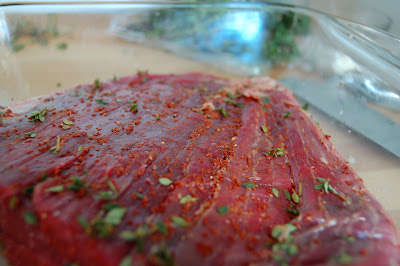 So when I happened across Flank Steak with Artichoke-Potato Hash and Aleppo-Pepper Aioli in the April issue of Bon Appétit, I knew it would be on the menu in short order. 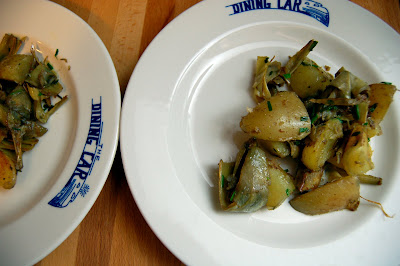 Have I mentioned that I've rediscovered my cast iron pan? I bought it at a yard sale in Vermont four years ago, used it twice, and hid it away in the cupboard. A few months ago I took it out again and it's perfect for things that need to be seared.... and now have noticed the correlation between the cast iron pan and eating more steak lately. Hmmm. 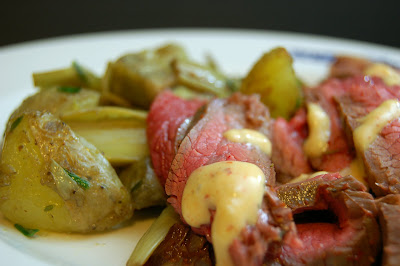 And now I must admit I've never prepared an artichoke before. The recipe calls for eight baby artichokes, which makes sense now that I've done it, but I used three grown-up specimens. More work, pricklier, still delicious. Basically, you lop off the top and start pulling/cutting the leaves off until you get to the pale yellow ones underneath. Since they were big, I cut them into twelve wedges each instead of 8. 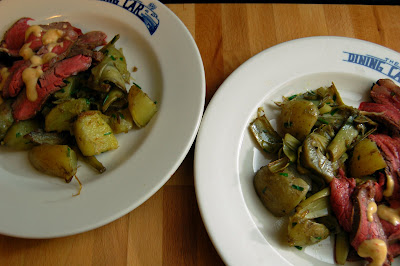 I also used Yukon Gold potatoes cut into bite size pieces instead of searching out Russian Banana potatoes because let's face it, we make do with what we have. Oh, and one more thing - see how clear the grain of the meat is in that raw steak photo up there? It is VERY important that you slice it perpendicular to the grain ( + not = ) or the meat will be unpleasantly chewy, not the tender deliciousness you've been anticipating.

Start with the aioli. Mash garlic, Aleppo pepper, and 1/4 teaspoon coarse salt to paste in mortar with pestle or in small bowl with back of spoon. Whisk in remaining ingredients and set aside. (If you're making this ahead of time and refrigerate it, you'll want to give it some time at room temperature to loosen up so it's more drizzle-able.)

Squeeze juice from lemon half into medium bowl of water. Cut 1/2 inch from tops of artichokes. Working with 1 artichoke at a time, break off dark outer leaves until only pale yellow leaves remain. Cut artichokes lengthwise in half; cut each half into 1/2-inch wedges. As you work, place artichoke wedges in lemon water to prevent browning. You may want to rub the cut surfaces with the other half of the lemon, too, before you put them in the water.

Place potatoes in heavy large saucepan. Add enough cold water to cover; sprinkle with salt. Bring to boil; reduce heat to medium-high and boil until potatoes are just tender, 8 to 10 minutes. (Mine took less than that, just start checking around 5 minutes if you've cut them small) Drain and set aside. Now would be a good time to preheat the oven to 400.

While the artichokes are browning, heat vegetable oil in heavy large ovenproof skillet (cast iron does a BEAUTIFUL job) over high heat. Add steak and cook until bottom is brown, about 2 minutes. Turn steak over; transfer to oven and roast until cooked to desired doneness, about 7 minutes for medium-rare. Transfer steak to work surface; tent with foil to keep warm. Let rest 10 minutes, while you're finishing the hash.