The Muffins of My Childhood 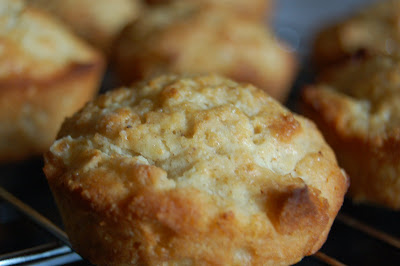 I know this isn't the most ringing endorsement I'll ever give a baked good, but: this is a solid muffin. It comes together lightning quick (mixing bowl to table in half an hour!), it tastes good, and it makes the house smell fantastic. It's flavored with nutmeg, though I usually add a bit of cinnamon to the batter as well as to the top of the muffin. Adam and I whipped up a batch to take to a birthday brunch last weekend, and I think that's their best application. They're small, so one is not enough for breakfast (at least not for me, but take that as you will) but they are a good supplement to a larger spread.

These are the muffins my mom used to make before church when I was little, and I thought "donut muffin" was just what we called them, but apparently that's their real name!

Using a fork, beat egg in mixing bowl. Add oil and milk or yogurt. Continue beating with fork. Sift flour, measure and sift with sugar, baking powder, salt and nutmeg. Add to mixture and stir with fork, very lightly. Turn into 12 greased muffin tins. (Next time I'll use 9 instead of 12, they were awfully tiny. Fill the empty cups with water so they don't warp in the oven.) Sprinkle each muffin with a mixture of sugar and cinnamon and put a dot of butter or margarine on top of each. Bake at 400 degrees about 20 minutes. Best served warm.
Posted by Adrienne at 2:40 PM