Currant Cakes (plus a winner and MORE books!) 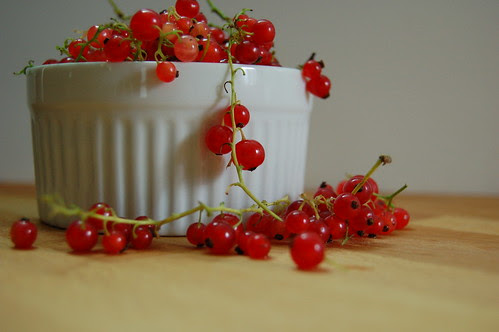 I went up to the market at Government Center on Wednesday around noon, looking for sour cherries. I had plans to start a liqueur. I found myself at the booth for Silverbrook Farms from Dartmouth, where I was drawn in by some lovely (purple!) spring onions. The farmer had some raspberries, but no cherries, so as I handed over my cash for the onions, I asked if he knew whether anyone at the market with cherries. He pointed me in the direction of the Keown Orchard booth (they did have cherries!), but then he asked if I would like to try the currants. I put a tiny red berry in my mouth and it exploded in a burst of tart, vaguely citrusy pink juice that actually made me say aloud "Whoa!" After a discussion of what they could be used for (muddled into drinks, reduced into syrup or jam, baked goods). I handed the man $3 and went on my merry way with a small carton of currants. 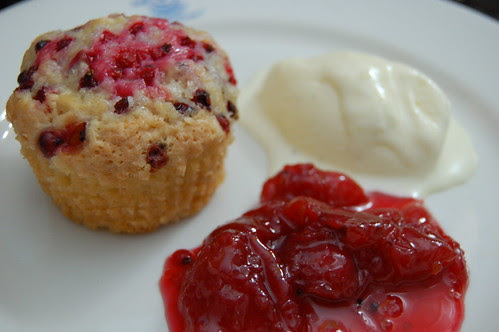 After a brief poll of the twitterverse, I decided on a batch of cakes. Well, cupcakes. Muffins? We ate them for dessert last night but then again for breakfast this morning, so I don't know what to call them. Anyway, I adapted this from Bea's recipe on La Tartine Gourmande, and next time I will almost certainly mix a few berries into the batter instead of just putting them on top, because they were such a nice foil to the sweetness of the cake that I wanted more! more! more! 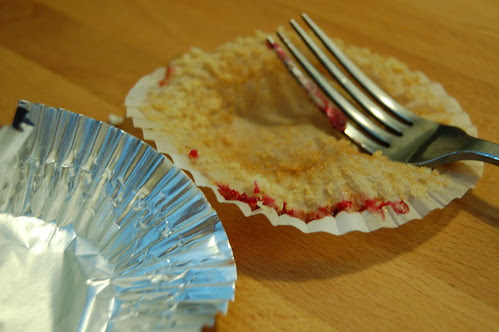 And about that book giveaway! The random number generator has selected from 17 eligible comment the winner: number 7! Congratulations actionmoviegirl! Shoot me an email with your address (adriennebruno AT gmail DOT com) and I'll get your books in the mail. But wait, there's more! 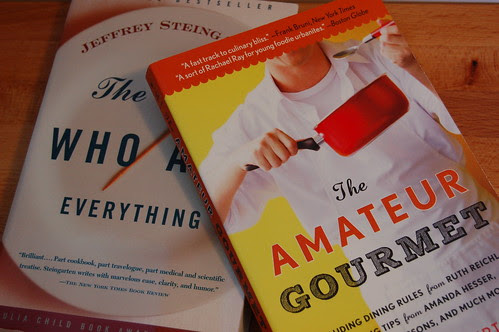 Because I like you guys, and because I have a bookshelf that STILL needs clearing, here are two more books you can win. This time the theme is gourmets. One, the Amateur Gourmet Adam Roberts and the other, a professional gourmet - food critic and frequent Iron Chef America judge Jeffrey Steingarten. Leave a comment on this post by midnight (Boston time) on Tuesday, July 14th and I'll select a winner on Wednesday. To get you started: what weird food item have you bought with no plans on how to use it? And what did you end up doing with it? Now, about those cakes....

Red Currant Cakes
I used a small muffin tin with six regular sized cups in it, but if you only have a full sized muffin pan, fill the empty cups with water so they don't scorch in the oven.

Preheat your oven to 350. Generously butter six muffin cups or line them with paper cupcake liners

In a medium bowl, combine the cake flour, almond flour, sugar, baking powder and salt. Whisk to combine. (I use a whisk because I'm a cheater and I hate sifting.) Beat the two eggs in a small bowl, then add them to the dry ingredients and stir gently with a wooden spoon. Before the eggs are completely combined, add the melted butter and stir just until it all comes together. If you're adding any currants to the batter, do so when you add the butter, but save some for the tops of the cakes.

Distribute the batter among six muffin cups, and gently press a tablespoon or more of currants on top of the batter. I started baking these for 25 minutes but I lost count of how many times I added five more minutes to the timer because they were still jiggly. I would start checking them at half an hour, but the may take as long as 45 minutes. Bake until the tops are risen and a thin knife inserted in the center just has a crumb or two clinging to it. Serve with ice cream for dessert or jam for breakfast.