A Flavor Best Described as Green 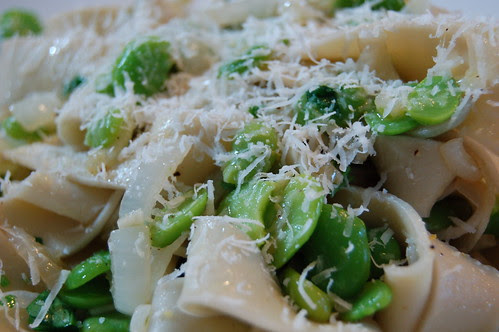 One of my favorite things about joining a CSA this year has been the abundance of produce that's new to me. Not that I've never heard of fava beans, but I hadn't ever worked with them before, and all I really knew is that they needed to be shelled twice. So when I got a pound of fresh fava beans in my CSA share a couple of weeks ago, I turned to twitter and asked how other people eat them. Kate mentioned they pair well with pecorino, and Adam had been asking about when we could make fresh pasta again, so one thing led to another, and this is what we ended up with.
Fresh pasta, lightly sauteed spring onions, barely-blanched favas, a very generous dose of black pepper and a flurry of pecorino romano. The flavor of a fava is best described, I think, as green. The grassy flavor is offset by the bite of pepper, so don't skimp, and the pecorino's nuttiness rounds the whole thing out. If you can track down some fresh favas, give this a try!
Pasta with Fava Beans, Spring Onion, and Pecorino
I encourage you to try making your own pasta (I learned it via the Real Epicurean), but if you're not DIY inclined, try this with one of the whole wheat pasta varieties available, the nutty flavor would make a nice duet with the pecorino, I think.
fresh pasta, enough for two people (200 g flour + 2 eggs), or dried pasta
1 lb fava beans
1 spring sugar onion (or 1 small red onion), sliced
olive oil
salt
freshly ground black pepper
pecorino romano cheese
Start a large pot of water boiling, and salt it well. You will use this to blanch the favas and cook the pasta.
Begin by removing the fava beans from the pods - you may have to snap the pods in half to get around the starchy bits and into the beans themselves. Blanch the beans in boiling water for just a couple of minutes, then remove using a spider or slotted spoon and plunge them into an ice water bath to stop the cooking. Drain after a couple of minutes, pop off the skins (this is the shelling twice part!) and set aside. Keep the pot of water boiling.
In a large sauce pan, sautee the onions in a couple of tablespoons of olive oil over medium-low heat until softened and translucent. This should only take about five minutes, and if they start to brown, turn down the heat but don't worry about it!
Meanwhile, cook the pasta - if you're using fresh pasta, it will only need 2 minutes or so, if dried, follow the recommended time on the box. Once the pasta is cooked, use tongs to transfer it from the water into the pan with the onions. Whatever water is clinging to the pasta will just loosen up the dish a little bit.
Add a the drained favas and give it a stir, then let it all heat through. Season with salt and a lot of black pepper, and if it looks dry add another tablespoon of olive oil. Plate into two pasta bowls, then top with a generous snowfall of pecorino.
Posted by Adrienne at 10:50 AM