Summer Salad (and where I've been)

My friends, I have missed you. It has been far too long since I last gave you a proper update or recipe, but if you've been following my twitter feed (recent tweets are just over there on the right) you know what's going on: I've moved house! Perhaps you are familiar with the diet of those-about-to-leave. Mainly I've subsisted these last two weeks on purchased sandwiches, pizza, Japanese take out (and the eleventh hour discovery of delicious, chewy udon in my old neighborhood) and coffee. In other words I haven't been cooking much. 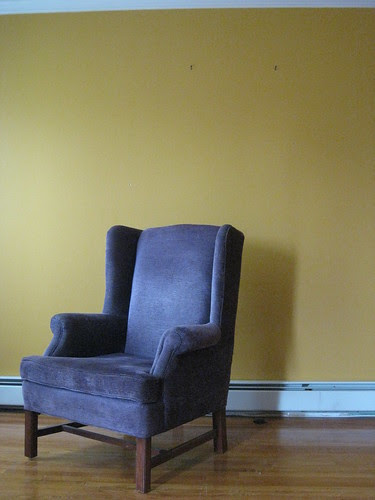 Instead, I've been moving two apartments into one, grocery shopping, making giant Target runs, buying a tv, driving to New Hampshire in weekend traffic to pick up a washer/dryer from a co-worker's son, realizing the dryer plug doesn't match the dryer socket, going to Home Depot to get a replacement dryer cable, going to Ikea, putting together insane amounts of Ikea furniture (ok, Adam did most of that), opening boxes and boxes and boxes full of books (hi, we like to read) and figuring out where everything is going to go in this GIGANTIC NEW KITCHEN. 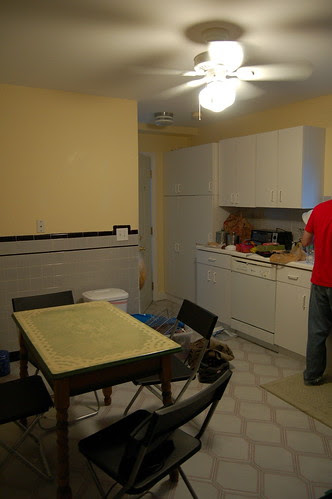 Hello, gorgeous! Please, please, please pardon the lack of done-ness in the unpacking department. Instead, maybe you'll want to focus on all those cabinets. And the floorspace. And the lovely, soft elephant gray tile and creamy butter yellow walls. And the beautiful, interesting, genuine tile floor. What if I tell you the Sicilian landlady who lives upstairs brought us a little tray of homemade biscotti umberto last night? Are you in love yet? 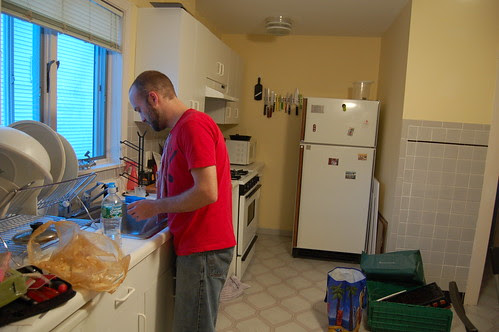 The first thing we made in our new kitchen was... well, it was a pot of coffee to help us get through some unpacking, but that's not very interesting. In fact, it's been four days since we officially moved in and we just cooked our first actual meal last night! (Ginger garlic marinated tofu with green peppers and udon, it did not photograph well, and I didn't try to make it.) Tonight was our CSA pickup, and I also stopped at the South Station farmer's market to pick up some tomatoes so we had a no-cook dinner of Summer Salad. I'm capitalizing it because it's not really worth making at other times of the year; the produce just isn't as good. No lettuce or salad greens in this week's share, so we just used a LOT of basil. Adding most of a can of cannellini beans makes it a meatless meal salad for us, but with or without beans it would also be a tasty side to something grilled. 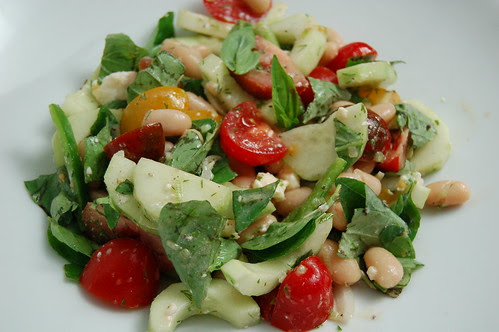 About a pound of small or cherry tomatoes, I bought a box at the market that included five or six varieties
Half a bunch of basil, roughly torn (generous handful)
Two cucumbers
half a spring onion, or more to taste
One small bell pepper, any color
1 T dill, chopped
1/4 cup feta cheese, crumbled
most of a can of cannellini beans
Simple vinaigrette, recipe follows

Wash all the vegetables. Peel the cucumbers, cut in half the long way and scrape out the seeds with a spoon (they make salads watery). Cut the cucumber into half moons about 1/4 inch thick. Quarter the tomatoes, or halve them if tiny. Chop the bell pepper into strips or dice it if you prefer. Slice the half spring onion thinly, reserve some greens for garnish. Combine all vegetables in a large bowl, and add the beans. Top with the feta, dill, and torn basil. Dress with vinaigrette and toss gently (use your hands, they won't pierce or squish the tomatoes). Serve with crusty bread.

Basic vinaigrette
I rarely make this the exact same way twice, but the basic recipe I use is as follows:

Mince a small shallot or part of the spring onion from the salad. Put it in a small bowl. Add a dollop of Dijon or grey poupon mustard, about half a tablespoon (I love mustard, you may want to start with less). Grind in some black pepper (5-15 turns, to taste) and some kosher or sea salt (half a teaspoon or so). Add a splash of red wine vinegar (about a tablespoon), and give that a whisk to combine the vinegar and mustard. Start adding olive oil slowly, whisking all the while. You'll add three or four times as much oil as vinegar. Alternatively, put everything in a small jar, and shake it shake it shake it like a Polaroid picture. Taste, and add more vinegar or salt or oil if you need it. Whisk/shake again. Very easily scaled up if you need more dressing, I usually make 1/3 of a cup for a two person salad.
Posted by Adrienne at 9:15 PM