Broccoli and Potato Stir-Fry with Lentils 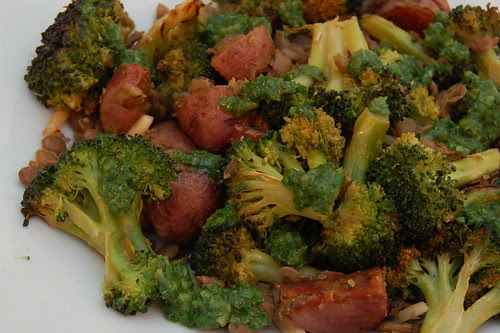 I mentioned last week on Twitter that I was riffing on a lentil recipe I found over at 101 Cookbooks, and one of my friends responded that she too was cooking with lentils that night. Apparently when it's 20 degrees with howling wind, I'm not the only one who wants to cuddle up with the coziest legume. 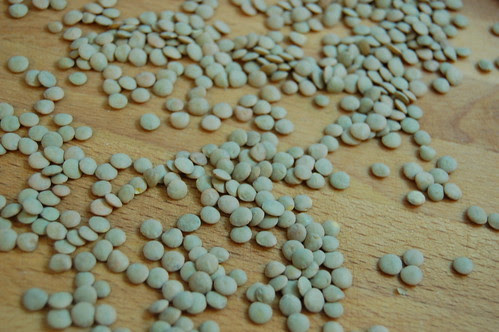 And cozy is exactly what this dinner turned out to be. It was like a big warm blanket with a mug of tea and a pair of mittens, not exotic or terribly exciting, but snug and warming on a blustery night. 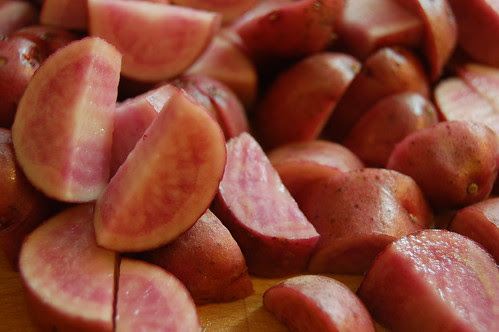 Plus when I cut open the red potatoes I had purchased earlier that week they turned out to be pink all the way through; don't they look like kielbasa sausages? I must have been in the mood for simplicity, because I found that positively delightful. 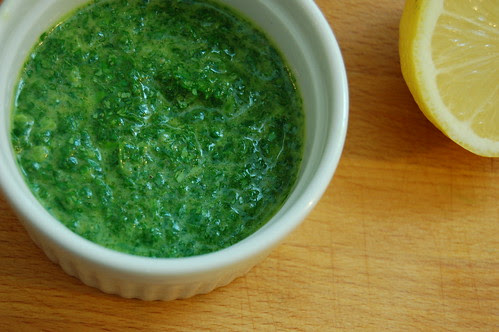 The recipe I adapted this from calls for a sauce of mint and chile in addition to several dollops of yogurt. I had cilantro and parsley in the fridge so I made a sort-of-chimichurri (make sure it's very bright with lemon, or the coziness can become heaviness) and I skipped the yogurt.

Broccoli and Potato Stir-Fry with Lentils
adapted from 101 Cookbooks

I roasted the broccoli in the oven while the skillet was full of potatoes because I wanted to cook them at the same time (I was hungry!). You can cook the potatoes, then set them aside and cook the broccoli in the same pan (you will probably need more oil), then add the potatoes back with the rest of the ingredients if you don't want to turn on the oven. But when it's 20 degrees outside, turning on the oven is something I want to do all the time!

I used the little blender attachment to my stick blender, but you could use a food processor or blender, just whiz all the ingredients together. You may need to stop and scrape the sides some, and make sure to taste it and add salt or lemon if needed.

For the stir fry:
10-12 small new potatoes (they don't have to look like sausage)
2 large crowns of broccoli
1/2 lb brown lentils (or red or green or whatever lentils), cooked and drained*
olive oil
slivered or sliced almonds, a handful
salt

Cut the two broccoli crowns into florets and toss with a couple of tablespoons of olive oil and a teaspoon of salt. Lay out on a baking sheet and roast, turning and stirring occasionally, for about 20 minutes, until the broccoli has some deep brown spots. (If broccoli is done before everything else, just set it aside, it'll be fine.)

Meanwhile, slice the potatoes in halves or quarters. Heat a wide skillet (with a lid) over medium-high heat and add a tablespoon of oil, then add the potatoes and stir. Sprinkle a little salt over the potatoes (1/2 a teaspoon or so), then put the lid on the skillet for a few minutes. Letting the potatoes steam themselves a bit helps them cook through before the outsides burn. Take the lid off and turn the potatoes a couple of times; you're trying to get a good golden brown crust on at least one side but if the outside browns very quickly, turn the heat down. This took me 10-15 minutes, but your mileage may vary.

When the potatoes are done (a knife meets no resistance all the way through the potato), add the cooked lentils and a handful of almonds. Toss it all around, season with salt, and add a little splash of olive oil if it looks dry.

Take the broccoli out of the oven and add it to the skillet. If it's been sitting, give it a little stir and a few minutes to heat back up. When ready to serve, top each plate with several spoonfuls of sauce.

*To cook 1/2 a pound of lentils: sort the lentils to remove any bits of non-lentil material and give them a rinse. Add to a pot with 3-4 cups of water and bring to a boil. Reduce heat to a simmer and cook 30-50 minutes until lentils are tender (the fresher the lentil the shorter the cooking time). Drain.
Posted by Adrienne at 9:23 PM