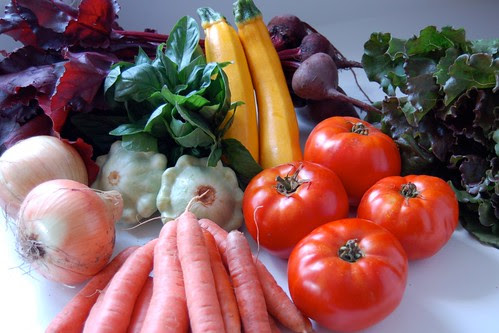 I know. I know. Those tomatoes! They're distracting me, too. Well, they would if they were still around. Before I wax rhapsodic, let me run down the inventory this week: beets with their greens (which are really purple), two yellow zucchini, two small pattypan squashes, a bunch of basil, a pound of carrots, two gorgeous onions and a head of red leaf lettuce. On Tuesday (vegetable day! the best day of the week!) we had a salad with the lettuce and a couple of tomatoes (plus an astonishing array of things I found in the fridge).

Wednesday I used the two remaining tomatoes in a riff on this baked pasta sauce from The Wednesday Chef. I chopped up the tomatoes into large chunks, spread them with some olive oil in a baking dish, and sprinkled a generous handful of breadcrumbs on top. (I had to use store bought panko, my freezer stash of crumbs was burned beyond recognition). I forgot the cheese, which it turns out was an error on my part. After 20 minutes at 400, I stirred the smushy melty awesomeness into a sauce, added a handful of basil and a modest shower of parmesan cheese and tossed it with some campanelle pasta. Adam's comment? "Need's more parm." He was totally right. I remember thinking that I didn't want to salt them too aggressively before they went in the oven because they'd be concentrating in flavor a bit and I knew I would be adding parmesan with the pasta. I was afraid of over salting, and instead wasn't aggressive enough. Lesson learned: don't be bashful! 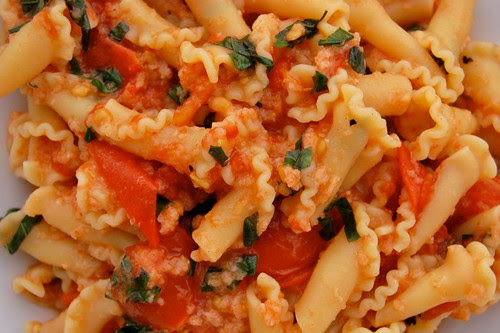 I did love the texture of this sauce, however. I know it's cucina povera, but using bread crumbs with tomatoes is inspired and to me it feels decadent to use purposely sogged bread. I could be a total weirdo, but hey, maybe you'll like it, too!

What interesting things have you done with tomatoes this summer? And aren't you glad they're back with such vigor after last year's blight?
Posted by Adrienne at 9:26 PM