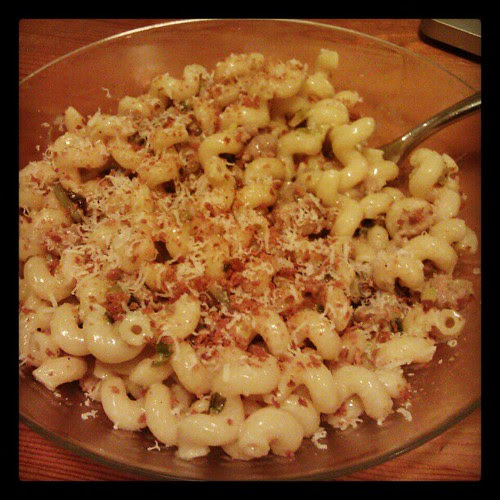 Solo dinner night, so I get to eat pork - hot italian sausage, specifically. But I also found myself with an abundance of creme fraiche, a head of fancy radicchio, and a craving for pasta, hence this dish.

Cavatelli with Sausage, Radicchio and Bread Crumbs
serves 2, or one hungry lady with leftovers for lunch

Bring a large pot of salted water to a boil. When it's boiling, drop the pasta. Cook until a minute less than it says on the box or until just before al dente.

In a large skillet, heat the olive oil over medium high heat and add the green onions, saute 1-2 minutes. Add the sausage, and cook until brown, breaking up into small pieces. Move the sausage and onions to the outside edges of the pan and add the radicchio to the center. Cook until wilted, then stir. Add the creme fraiche, it will melt rapidly, just stir it in. Let the whole mess bubble until thickened, or until the pasta is almost cooked.

When the pasta is still firm, use a large slotted spoon or a spider to remove it from the water and add it to the skillet. Stir it all up, let it simmer until the pasta is cooked all the way (less than a minute). Remove to a plate, top with bread crumbs for crunch and parmesan for added deliciousness.

NB: you probably won't need to add salt, given the saltiness of the sausage, but taste it as you go and add salt if necessary.