Hi, friends! Did you have a good weekend? I spent most of this weekend enjoying the awesome weather, and I'll tell you all about it tomorrow, but today I wanted to show you the soup I made a few weeks ago. I was very, very bad while making it: I did NOT take enough pictures to show you a step by step, but it's easy and delicious and may be the perfect fall food, because it takes advantage of the hot peppers and end of season corn that are still kicking deliciously around the farmer's markets. 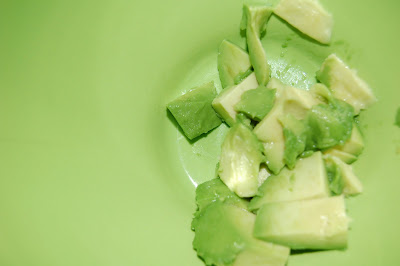 I used a combo of jalapeno and poblano peppers but I added cayenne and red pepper flakes in the cooking. Nex time, I'll probably add another hot pepper, though I like the mellow flavor of the poblano. You could make a delicious soup with whatever heat level you can handle. 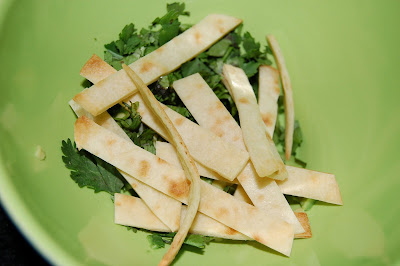 There are tons and tons of tortilla soup recipes on the food blogs and on recipe sites like epicurious, so google away if you're looking for an option sans chicken or avec something else. Most of the recipes I read called for corn tortillas, but we didn't have any, so I used wheat and they were just delicious. I also made too many and snacked on crunchy tortilla strips all day. 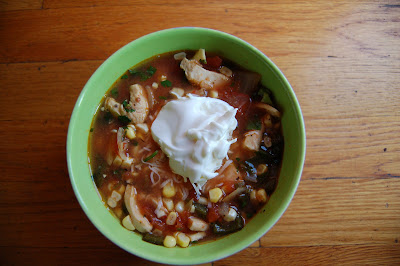 1 jalapeno pepper, diced as small as you can
1 poblano pepper, diced not quite as small as you can
1/2 onion, chopped
1 chicken breast, cut in strips or bite sized pieces
4-5 c. chicken broth
1 can roasted diced tomatoes
kernels from 2 cobs of fresh corn (see this removal method), or a generous cup of frozen corn
red pepper flakes or cayenne pepper to taste
salt to taste (start with half a teaspoon)
juice of one very juicy lime
1-2 handfuls cilantro (half a bunch)
1/2 an avocado per serving
tortilla strips (from 5 6-inch corn or four tortillas)

Heat a splash of olive oil in a large pot over medium heat. Add the peppers and onion and sauté until they've softened a bit, about 3-5 minutes. Don't worry if they get a bit of color on them, but don't let them burn. Add the chicken and sauté until it is mostly cooked through - 5-7 minutes.

Now add the chicken broth, diced tomatoes, and a shake of the pepper flake of your choice. Let the soup come almost to boil, then knock the heat back to low and let it simmer uncovered for 15 minutes. Taste and add salt and more pepper flakes or cayenne if you need more heat - mine did. Simmer another ten minutes or so.

While soup is simmering, make tortilla strips: using a sharp knife or pizza wheel, cut the tortillas into strips about 3/8" wide. Toss with a little olive oil, spread on a sheet pan and bake in a 350 degree oven, tossing a couple of times for 10 - 15 minutes.

About a minute before soup is done (though really the timing is quite loose) add the corn kernels - give it a few minutes if you're using frozen corn. When it's done, turn off the heat and add the lime juice. Now build the soup: dice the avocado and place in a bowl. Add half a handful of chopped cilantro and some tortilla strips. Ladle soup into bowl, then garnish with shredded jack cheese and a dollop of sour cream.
Posted by Adrienne at 11:41 AM