When it comes to farmers' markets, I am an easy mark. Sunday afternoon, Adam and I were walking around the SoWa open market, which consists mainly of art and other handmade items, but has a few farmers with produce around the edges. I knew I needed a few things for the ratatouille I was making that night, but I also wanted some apples and leeks. When I got up to the front to pay, the woman at the stand asked if I had tried the strawberry tomatoes, and offered me a sample... They're so strange! Sweet like a berry, acidic and slightly tart like a tomato. I bought a pint. (She also sold me on a pint of some super sweet grapes... again, easy mark). Man, these things are interesting. At first I thought they were just tiny tomatillos because of that husk, but it turns out they actually are called strawberry tomatoes, as well as cape gooseberries. According to their wikipedia entry, they are indigenous to South America but were brought to South Africa in the 1800s, near the Cape of Good Hope (hence the name). They're not related to gooseberries, but they ARE related to tomatillos (as well as tomatoes, eggplant and potatoes) so I'm not completely insane. 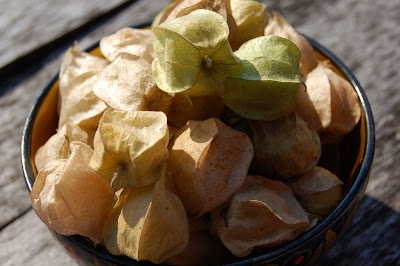 After I had tried one, I asked the woman at the farm stand what I could DO with them. She told me to just eat them (ha) but then mentioned that some people make pies with them because they are so sweet. Iiiiinteresting. 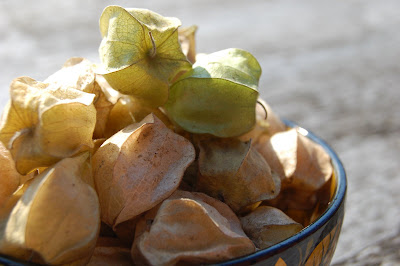 A few months ago I was given three small (4 inch) tart tins as a gift, but I hadn't found a recipe yet that struck my fancy enough to actually make tarts, so I made one up. I made a dough, wrapped it in plastic and stuck it in the fridge. 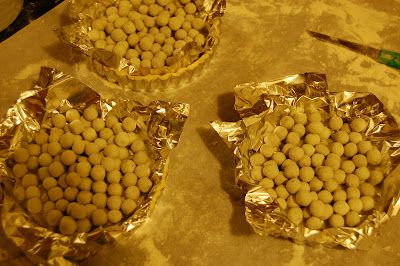 A few hours later I decided eating at 5pm was a bad idea for a Sunday, because I was still hungry. So I took the dough out, and cut it in three pieces, which I rolled out and laid in the tins, pressing the dough into the ruffled edges. I cut off the excess, lined them with foil and added pie weights (look, Hugh! I used the pie weights!). 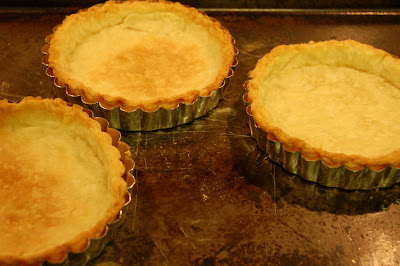 I baked them in a 375 degree oven for 15 minutes, then I removed the weights and foil and let them cool while I mixed up the filling. 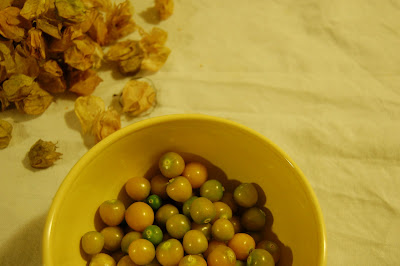 First I husked the berries. 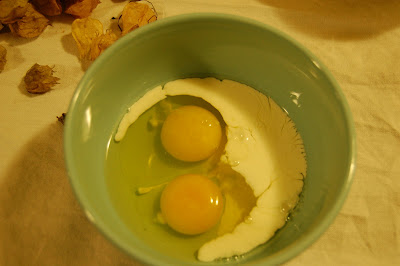 Then I cracked two eggs in a bowl, and added a splash of half & half. 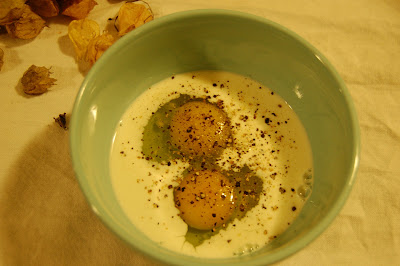 I added salt and pepper. 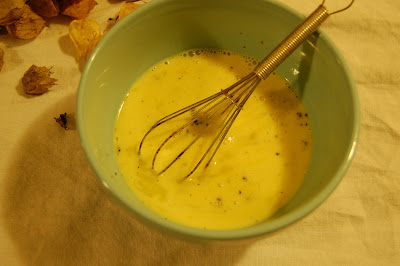 Then I whisked it all together. 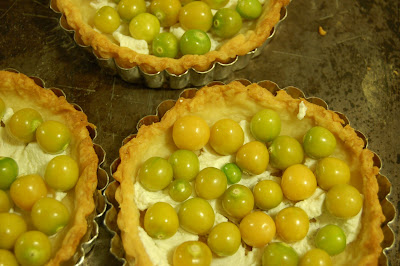 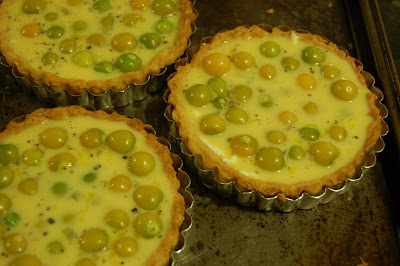 I spooned the egg mixture into the tarts and stuck it back in the oven for another 20 minutes, until the filling was set and golden. 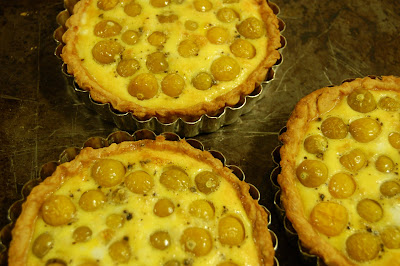 I ate one for dinner #2 on Sunday night, but the other two have made wonderful breakfasts and reheat well in the toaster oven. I suspect this would work very well with other veggies, too, particularly those that straddle the sweet/savory line. I have some leftover dough, so I'll probably be experimenting again soon. 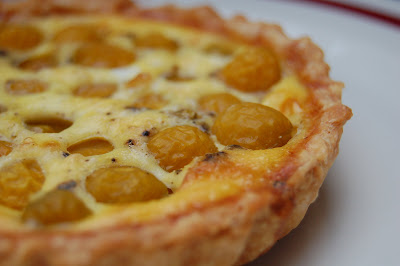 Tarts with Strawberry Tomatoes (Cape Gooseberries)
I only had three tart tins (the kind with removable bottoms), but I had enough dough for four. If I had a few more berries I could have stretched this to four, but the recipe below is for exactly what I did.

Make the crust: Put the ice water and vinegar into a liquid measure cup or bowl. In a food processor or bowl mix the flour and salt together. Add butter cubes and process (or cut in using a pastry cutter or two knives) until the mixture resembles coarse meal. Add the vinegar and ice water slowly while processing or stirring, until the dough clumps together. Add teaspoonfuls of ice water one at a time if dough is too dry to come together. Gather the dough in plastic wrap, flatten into a disk and refrigerate for at least a couple of hours.

Preheat oven to 375. Give the dough a couple of minutes on the counter, then cut the disk into three pieces and roll each piece into a 6-7 inch round. Line each tin, pressing dough into the corner and into the fluted edges. Trim excess dough - you will have extra. Line tarts with foil and weigh them down with pie weights (or dried beans) and bake for 15 minutes, until just golden (put them on a cookie sheet to ease transfer in and out of oven, and in case of leaks). Remove weights and foil, and allow to cool while you mix the filling.

Crack two eggs into a bowl, and add a splash of half and half or cream. Add 1/4 teaspoon of salt and several grinds of black pepper. Whisk to combine. To assemble the tarts, spread about two tablespoons of soft goat cheese in the bottom of each tart and divide the berries evenly between the three. Spoon or pour the egg mixture evenly between the tarts, then put them back in the oven for another 20-25 minutes. Remove when the filling is set in the center and golden. Allow to cool for 5 minutes, then remove from tins. Tarts keep, refrigerated, for a few days and reheat well in the toaster oven.
Posted by Adrienne at 11:40 AM