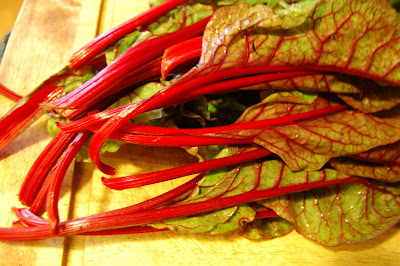 A few weeks ago I had a particularly rough Thursday; things just didn't go my way. I was supposed to meet Adam at my house to make dinner and needed a few things at the market, but since I had such a crappy day and groceries are my retail therapy of choice, I ended up bringing home some semi-strange things we didn't *really* need. Six pounds of chicken. Two sizes of freezer bags. Wonton wrappers. 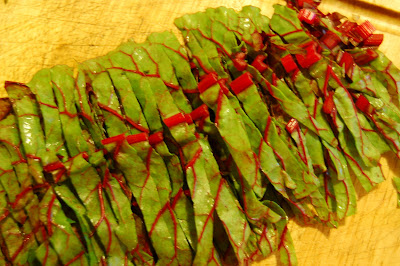 I don't know about you guys, but I love Alton Brown. I think he is the coolest, nerdiest, most awesome Bill-Nye-meets-Food-Network host of all, and I am really enjoying his Feasting on Waves series (so is Hugh). I dvr Good Eats on the regular. I got his first cookbook, I'm Just Here for the Food, as a Christmas gift two years ago and I had read the whole thing by the 27th. His turkey brine method is brilliant, and I trust him for a LOT of other methods. 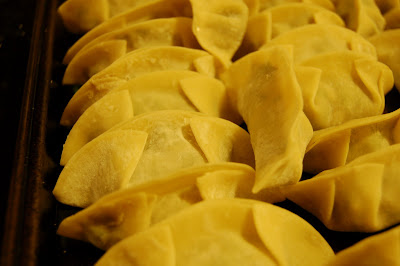 So back to the wonton wrappers. Last year I made Alton's Perfect Potstickers from the Wonton Ways episode of Good Eats and they were delicious. But Alton has been ousted in the potsticker world, because these are better. 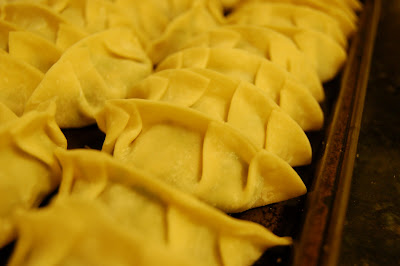 Last week Bitten ran a post by Ed Schneider in which he used chard in lieu of Napa cabbage and made his wrappers from scratch. I had this beautiful ruby chard from the farmer's market and my wonton-wrappers-bought-in-frustration in the fridge, so I followed his suggestions and made APPROXIMATELY THREE THOUSAND potstickers. Ok, sixty, but still Hugh and I only ate twenty and there are tons in the freezer now. Heads up guys, this makes a lot of food. It's also assembly-heavy, but if you need a project or have a bunch of people helping, it's fun! 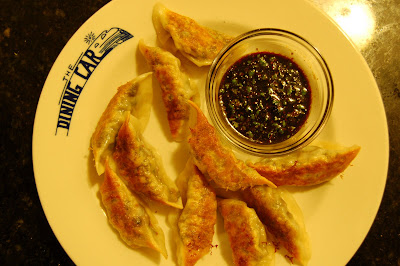 I did all of the chopping by hand because I needed a project, but you could also use a food processor. Chop the chard first, then salt it well and let it sit in a colander for 15-20 minutes while you chop the rest of the ingredients. When you're done practicing your knife skills, wrap the chopped chard in a clean towel or cheesecloth (I used a paper towel, but it tore) and squeeze as much liquid out of it as you can.

I will now commence using a clock analogy: to assemble the wontons, hold a wrapper in the palm of your non-dominant hand. Put a little bit of filling (about a tablespoon, but you'll get a feel for the right amount as you keep making them) in the center of the circle, and wet the edge of the wrapper at about twelve o'clock. Bring six o'clock up to meet 12 and seal them by squeezing. Now we are looking at the top half of a clock: Wet 1 o'clock and bring 2 o'clock up to seal it. Wet 11 o'clock and bring 10 o'clock up to seal it. It's ok if you make just one dart per side, that's how I started (first photo) and they taste just as good, but you could also make two darts per side (second photo) and you'll get a curvier dumpling that stands up better in the pan.

Is this not making any sense? Watch this video and I think you'll see what I mean. Jayden of Steamy Kitchen also has some helpful photos in this post. As you assemble, be sure to keep the wrappers and just-constructed wontons under a damp towel so they'll be easier to work with. Also be sure to seal tightly - you don't want the filling to come out in the pan.

Once you've made your million dumplings, now you get to cook them! I could fit twenty in my 12 inch skillet (non-stick, unless you're insane) and that was perfect for 2 people for dinner. Put a couple of tablespoons of vegetable oil in a 12 inch (non-stick, unless you are crazy) skillet and place the wontons in - stand them up on their flat little butts (the way they are sitting on that cookie sheet, please). Now add about a 1/4 inch (3/4 cup or so) of water, cover the pan, and turn it to medium-high. Once it boils, turn it down to low for 7-8 minutes. This gives the dumplings chance to steam to done-ness. Once they're steamed through, take off the lid and let the water cook off - probably another 5-10 minutes. Here is where the magic happens: all that's left in the pan is the vegetable oil, so the bottoms (the aforementioned flat little butts) get nice and crispy and golden brown.

Serve the potstickers crispy side up with dipping sauce.

Serves 6, but you can freeze them - place the assembled but uncooked potstickers on a cookie sheet so they are not touching. Freeze for 30 minutes, then take them off the cookie sheet and put them in a plastic freezer bag. This way you can take out as many as you need instead of a giant frozen clump.