A few weeks ago at T^2's housewarming party, I had homemade pickles for the second time in my food-conscious life. I could have said adult life, but I think that would have been a lie. My aunt (Hi, Auntie Patrice!) makes her own pickles too which I had a couple of summers ago - my first time - and I'll bet my mom made them at some point (Mom? Have you made pickles?). 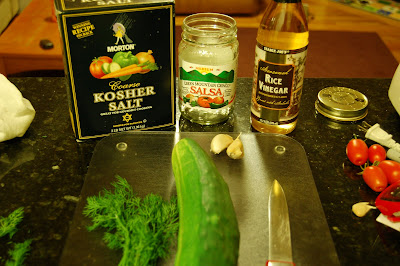 But since I only started getting 'into food' in the last couple of years, it wasn't until I had Tammi's pickles that I wanted to try making my own. Since then I've come across approximately 497 pickle methods and home-pickling stories on various blogs made from a plethora of fruits and vegetables. I wanted to start with a classic cucumber dill pickle, and I knew I would want them to be sandwich appropriate (Tammi's were delicious on burgers) so I sliced them into rounds instead of spears. 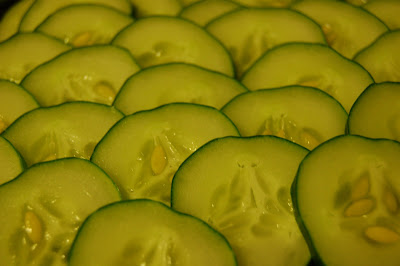 I poured in a pretty standard brine: 1/2 cup rice vinegar, 1/2 cup water, 1 1/2 tablespoons of salt. I added two garlic cloves and a bit of dill. I stuck it in the fridge. 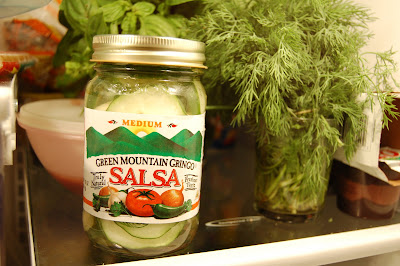 The next day I gave the pickles a try. WHOA. SO vinegary. And maybe even too salty. And frankly, they did not improve with age, even though I poured out some of the brine and added more water. Next time I will go skew the ratio in the favor of water if I want to eat them out of hand. All is not lost, however! The extra tart pickles are DEEElicious on Hugh's turkey burgers with marmalade mustard glaze, Swiss cheese, lettuce and tomato. 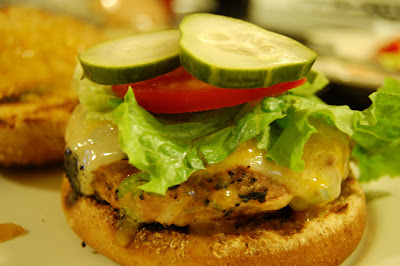 My Too Acidic But Delicious on Burgers Pickles
Inspired by Tammi, who I think was inspired by Tom's Grandma

Clean the jar. Slice the cucumber into rounds between 1/8 and 1/4 inch thick. Slice the garlic cloves into a couple of pieces. Put the cucumbers, garlic and dill in the jar - you will probably have extra cucumber slices. In a large measuring cup or bowl combine the vinegar, water and salt, and stir to dissolve. Pour the brine over the contents of the jar. If there is still space fill it with water. Stick the jar in the fridge. Pickles are ready the next day but will keep for weeks in the fridge.
Posted by Adrienne at 12:12 AM