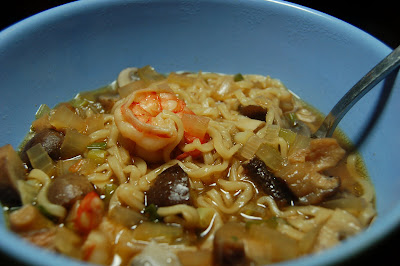 I may have mentioned before that I'm a big Alton Brown fan. This particular recipe is one I've used before, but last time I followed the directions. Heh. You're supposed to lay down the half brick of ramen noodles (yes, the 11 cent ones) in a tin foil square and stack the other ingredients on top, then make a pouch and pour in the liquids, and bake the whole thing in a 400 degree oven for fifteen minutes.

Except I'm almost out of tin foil. So I heated the liquids (veggie broth, mirin, soy sauce, sesame oil) in a pot, then added some red pepper flakes, then added the veggies and shrimp together. I think next time I'll wait and add the shrimp at the very end; they got a bit overcooked what with the boiling instead of steaming. I also halved the original recipe but kept the original red pepper amount - so this was a spicy one. Also, soy sauce is plenty salty (even the low sodium variety) so I didn't add any extra salt. Next time I'll play with adding more and different vegetables, and I bet you could use chicken or beef in place of the shrimp, too...

Combine the veggie broth, mirin, soy sauce and sesame oil in a medium pot over medium heat until it simmers. Add the noodles, red pepper flakes, both kinds of mushrooms, scallions and onions, stir everything under and cook for about 2 minutes. Add the shrimp and cook another minute or two until the shrimp are pink and cooked through. Taste for spice, add more red pepper for more spice or more veggie broth to dilute if it's too salty. Serve immediately.
Posted by Adrienne at 10:54 AM