Pasta with Golden Beets and Their Greens

Did you know I majored in Italian Studies in college? I speak the language and I studied at l'Universita di Ferrara for a semester my junior year. When I graduated, I took a job as a travel agent with an Italian Tour company in Boston. Whether I liked that job (I didn't) and whether I still work there (I don't) is not relevant to this post; the point is that the Italian-born owner of the company was an excellent cook. If I came in with leftover Spaghetti Bolognese for lunch, she would tell me how her mother made Bolognese. Every once in a while she would bring in homemade pizza that was really delicious. She also subscribed to Gourmet magazine. It was just my luck that she subscribed both in her name and in the name of the company, and I usually snagged the extra copy floating around the office. That first year out of school was the first year I really had to cook for myself and the magazine was an inspiration. I still make the first thing I ever cooked from Gourmet - Seared Tofu & Vegetables with Coconut Sauce from the September 05 issue. When I quit that job I lost my access to free issues and I only picked it up at the grocery store every once in a while. 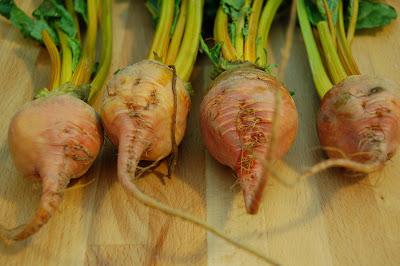 Until this year, when I bought myself a Christmas present: I finally (finally!) subscribed to Gourmet. AND there was a *special offer* on the interwebs, so I subscribed to Bon Appetit, too! So now you know the long and winding road that takes us to today's recipe, Pasta with Golden Beets and their Greens, from the February 2009 issue of Bon Appetit. I've messed with the name a bit because I've messed with the recipe a bit. I'm not a fan of farfalle for purely aesthetic reasons (I think they look sort of juvenile on the plate) so I used gemelli instead. I also cut the recipe in half because I only bought one bunch of beets and it was just me for dinner. 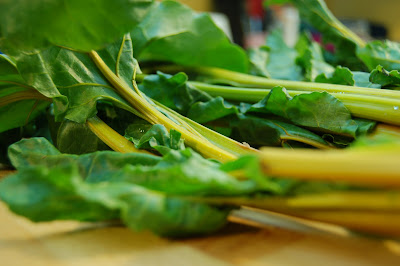 Aren't these beautiful greens? I have purchased beets at the grocery store and had greens so sad and lifeless that I tossed them rather than trying to salvage them, but these guys are just so perky and tasty-looking, exactly what the recipe called for. You could use red beets if you want, but your pasta will definitely turn pink. 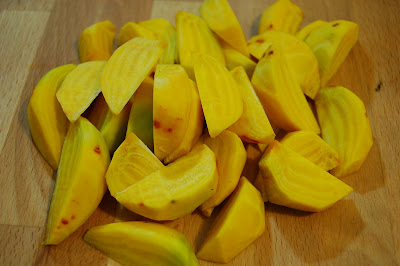 Oh, and this isn't the speediest of recipes. It was fine with me, because like I said it was just me and I was watching old episodes of No Reservations and was perfectly content, but if you don't have 40 minutes to caramelize onions, maybe save this for another day, hm? Elise has posted a time-lapse video of caramelizing onions which is really amusing, but here are mine at 0 minutes: 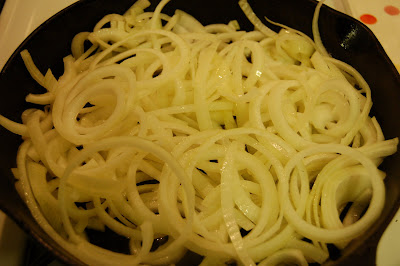 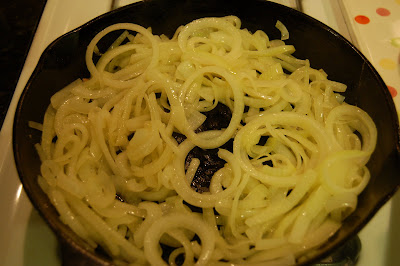 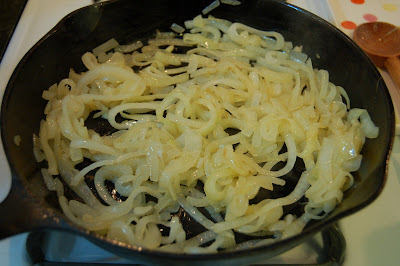 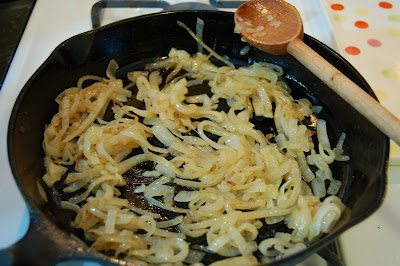 and finally, 40 minutes and ready to go in the finished dish. 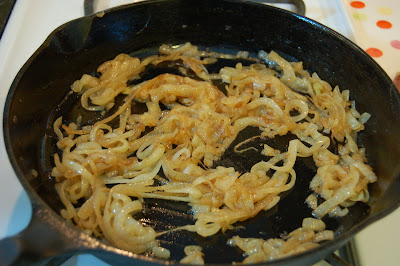 Speaking of the finished dish (and please forgive the weird Space Odyssey perspective in this photo, I got impatient to eat and this is the best one I got), doesn't this look yummy? The sweetness of the onions sets off the earthiness of the beets really well and the pine nuts are a welcome crunch. And I got to feel like I was really behaving, since I ate the WHOLE vegetable AND there were leafy greens. I hope you like it, too. 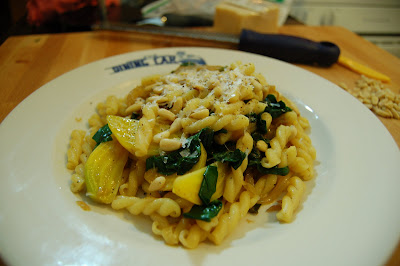 Pasta with Golden Beets and Their Greens
2 generous servings

Toast the pine nuts in a dry skillet over medium heat for 2-3 minutes until they smell good and are golden in spots, set aside. Add a couple of tablespoons of olive oil to the skillet, then add the sliced onion and saute about 10 minutes until it is starting to soften. Reduce heat to medium-low, and continue to cook the onions, stirring every few minutes, until the caramelize and become brown, another 30-40 minutes.

Meanwhile, bring a large pot of well salted water to boil. Boil the beet wedges until tender, about 10 minutes. Remove from water with slotted spoon and return water to a boil. Add the pasta to the water and cook until al dente.

Once the onions are browned and the pasta is cooking, add the beet greens to the skillet with the onions along with another tablespoon of oil. Cover and cook about 5 minutes, stirring occasionally, until the greens are tender. Drain the pasta, reserving some of the cooking water, and return the pasta to the pot along with the onions and greens mixture, pine nuts and about 1/4 cup of grated Parmesan. Add pasta water, 1/4 cup at a time to moisten if you like. Season with salt and black pepper, and serve, topped with more shredded cheese.