Blue Cheese Risotto (and a Large Piece of Meat) 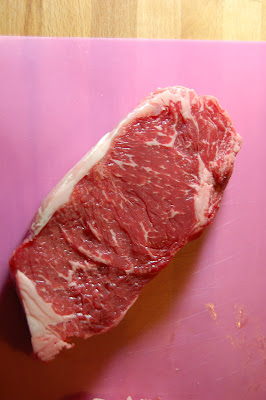 Given that photo, I think you may be surprised to hear that steak is not the star of this post. Nope. I marinated it (and it's twin) in some red wine and garlic, dried it thoroughly, seasoned it thoroughly with salt and pepper, and cooked in a cast iron skillet on high heat: rare for Adam, medium-rare for me. 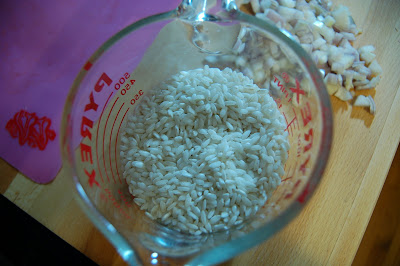 Ooooh, hey, here we go. Risotto! That's the star here. Isn't it crazy how rice and broth and a little bit of olive oil can go from just a pile of grains to something smooth and creamy and, say, the perfect bed for a delicious steak? 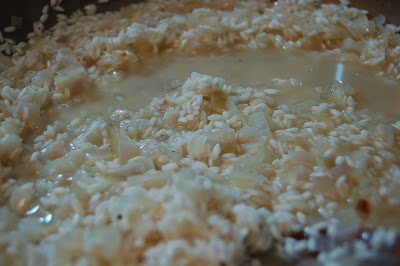 It's creamy, starchy, slightly stinky-in-a-good-way from the blue cheese. Add a little steamed spinach to make you feel virtuous, and you will have a meal your boyfriend might just say is one of his favorites you've ever made. I'm just sayin'. 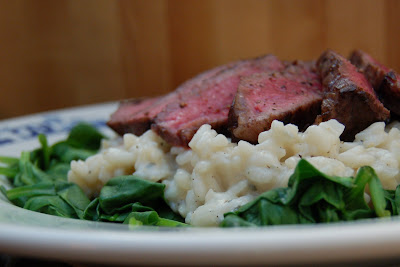 In a medium pot, bring the broth to a simmer; you'll want to keep it warm but not boiling. Heat the olive oil in a wide, deep saute pan over medium heat and add the diced shallot. Saute for a couple of minutes until the shallot is softening, then add the rice and toast it, stirring. After a couple of minutes the rice should be starting to show a few spots of golden toastiness. Now add about a cup of the warm broth and stir.

You don't actually have to stand right near the stove and stir constantly, but you should stir frequently. When you drag a spoon through the rice and the liquid doesn't rush back in to fill the space, add more liquid, a half cup at a time. Keep stirring, and after about 20 minutes to half an hour, the rice will release its starch and become creamy. You might not use all the broth, but if you run out before the rice is done, just keep going with water. Taste it, the grains should be al dente, not mushy, but definitely cooked through. At this point, crumble in the blue cheese and season to taste with salt and pepper. Serve over spinach and under steak.