In which I am adopted, and make cupcakes. 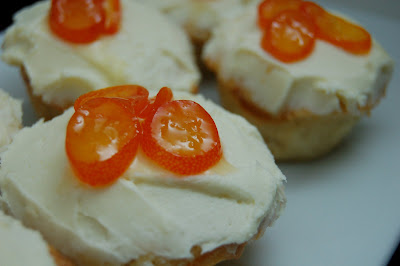 First, Mom, don't worry! I'm only talking about Adopt-A-Blogger! When I saw on Dine and Dish that Kristen had decided to host the event a third time, I was excited. I had heard about during round two, and doesn't it seem like such a good idea? Baby food bloggers (about a year old or younger - yes, I know I just turned 1, but I have a lot to learn) are "adopted" by more seasoned bloggers for 3 months. I'm lucky to have been adopted by Cheri at Adventures in the Kitchen... Hi Cheri! I'm adding Cheri to my blogroll over there on the right, and you should go check her out. And then you should make popovers, and send them my way. Yum. 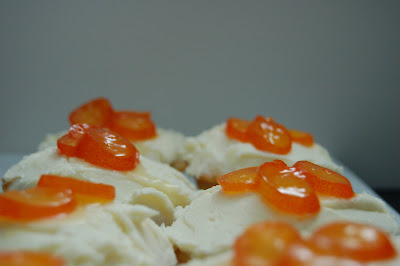 On to another delicious pastry item baked in a small container: about those cupcakes. I think they're cheerful looking, but frankly they weren't the best cupcakes I've ever had. Mostly I wanted to make them because I had candied some kumquats and I was expecting visitors... but then that turned into an impromptu trip to Brooklyn and I left the cupcakes in the fridge. This recipe is from the February 2006 issue of Bon Appetit, and the Epicurious reviewers must have been joking when they describe it's "light crumb." I had eaten one before I left, and it was tasty, but not airy and light. I think I folded in my egg whites a little too vigorously. On my return to Boston three days later, they had gotten sort of heavy and more fudge-like, but the flavor is still good, if you like white chocolate.
White Chocolate Cupcakes with Candied Kumquats
adapted from Bon Appetit, February 2006
8 ounces high-quality white chocolate (I used Ghirardelli) chopped
1 3/4 cups all purpose flour
1 teaspoon baking powder
1/2 teaspoon coarse kosher salt
1 cup sugar
3/4 cup (1 1/2 sticks) unsalted butter, room temperature
1 tablespoon vanilla extract
1/2 cup canned unsweetened coconut milk
3 large egg whites
Preheat oven to 325°F. Line a twelve cup muffin pan with paper liners, or not if you use a silicone pan like me. Place white chocolate in metal bowl set over pan of barely simmering water. Stir until melted and smooth.
Whisk flour, baking powder, and salt in medium bowl. Using electric mixer, beat sugar, butter, and vanilla in large bowl until blended. Add warm white chocolate to sugar mixture; stir to combine. Add flour mixture in 3 additions alternately with coconut milk in 2 additions, beating batter just to combine between additions. Batter will be stiff.
Using clean dry beaters, beat egg whites in medium bowl until soft peaks form. Gently fold egg white mixture into batter in 3 additions. The first addition can be stirred quite vigorously, but when folding in the last two additions, be gentle, as you don't want to break the egg white foam.
Divide batter among muffin cups (about 1/4 cup each). Bake until tester inserted into center comes out clean, about 25 minutes. Cool completely before frosting.
White Chocolate Frosting
I left out the white chocolate, and this made a simple cream cheese frosting instead
4 1/2 ounces high-quality white chocolate, chopped
6 ounces (3/4 of 8-ounce package) cream cheese, room temperature
6 tablespoons (3/4 stick) unsalted butter, room temperature
1/4 cup powdered sugar
1/2 teaspoon vanilla extract
1/4 teaspoon coarse kosher salt
Stir white chocolate, if using, in ametal bowl set over saucepan of barely simmering water until melted and smooth. Cool slightly. Using electric mixer, beat cream cheese, butter, sugar, vanilla, and salt in medium bowl until fluffy. Gradually beat in melted white chocolate. Let cool until thickened to spreadable consistency.
Spread frosting over cupcakes. Drain Candied Kumquats (see below); arrange kumquats decoratively atop cupcakes. Leftover candied kumquats can be stirred into your favorite pound cake for delicious results!
Candied Kumquats
Couldn't be simpler! Way less complicated than the orangettes.
20 kumquats, sliced and seeded
1/2 cup water
1/2 cup sugar
Stir water and sugar in small saucepan over medium heat until sugar dissolves. Increase heat and bring to boil. Add kumquats and return to boil. Reduce heat to medium and simmer until fruit is tender and liquid is syrupy, about 20 minutes. Transfer to bowl; cool to room temperature. Keeps for ages in the fridge.
Posted by Adrienne at 10:27 AM