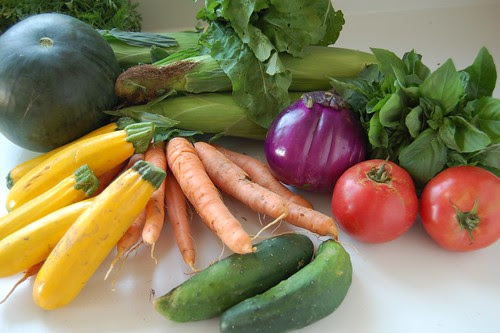 What a colorful week! We got a very heavy load of: a small watermelon, five baby yellow zucchini, a big bunch of carrots, two cucumbers, two tomatoes (the first tomatoes!) a baby eggplant, a bunch of basil, a bunch of arugula and FOUR ears of corn.

Positively thrilled by the tomatoes (tomatoes! tomatoes! they're here!), I wanted to keep it simple so I could really savor them. So I chopped 'em up and slapped 'em on some toast. I pushed a couple of cloves of garlic through a press - you could mince, too. Then I added a splash of a mild balsamic vinegar to mellow out the raw garlic. Next up, three chopped tomatoes and three tablespoons of basil chiffonade (rolled up like a cigar and sliced into strips), then seasoned it with salt and pepper and doused it with a tablespoon or so of olive oil. 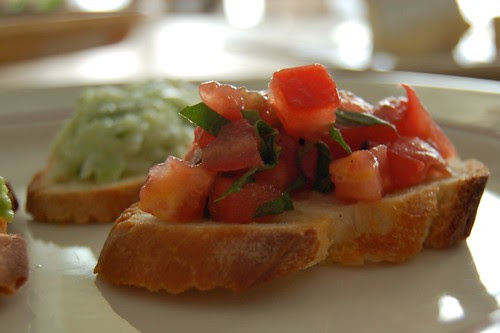 A little stir and a 10 minute rest later, here's the finished product piled on some crunchy toasted baguette slices. Oh, and that green toast-topper in the background is two cucumbers, peeled, seeded and grated, mixed with salt, pepper, two tablespoons of chopped fresh dill and a dollop of yogurt. Yeah, we like snacks for dinner. What's your favorite thing to put on toast?
Posted by Adrienne at 10:15 PM