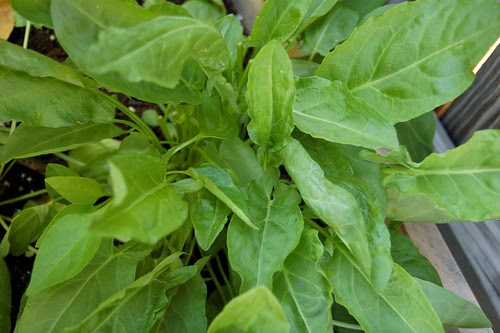 This year I planted sorrel in the garden. I tried to start it from seed, but my seedlings were so tiny when I set them out I was sure they weren't going to make it, so I bought a couple of heartier specimens at an early spring farmer's market. The woman I bought them from warned me that it's perennial, which made me a tiny bit nervous because I had never tasted it before, though I was intrigued by the descriptions I had read about it being aggressively tart and tangy. Wikipedia describes it as similar to kiwifruit or like sour strawberries, but I think it's more like tart lemony spinach. 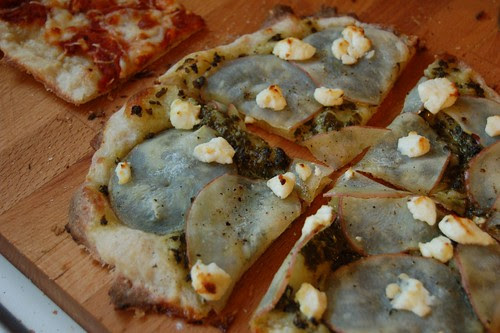 I finally harvested a big bunch of leaves over the weekend and I thought about making soup or maybe saucing some salmon with it, but I had defrosted some pizza dough from a new recipe I had tried (it was really tough to work with, so I won't recommend it here) and I've been thinking about potato pizza so I figured there's potato in sorrel soup, I bet that would make a mighty fine pizza. Indeed it did, my friends. Indeed it did.

Sorrel Pesto
makes about a cup

I didn't have any pine nuts and I didn't feel like using walnuts, so this is really more of a sorrel puree. If you have nuts, feel free to toast a couple tablespoons and include them in your pesto.

Combine all ingredients in a food processor and process until you get a consistency you like. Adjust seasoning.

For the pizza:
your favorite pizza dough, enough to make a ten inch pie

1/3 - 1/2 cup sorrel pesto
one red skinned potato, washed and sliced very thin on a mandoline (hold in cold water while you prep the rest of the ingredients)
1 tablespoon olive oil
1 ounce goat cheese

Preheat the oven as high as it can go with a pizza stone if you have one. Stretch the dough, top it with the pesto, then the potatoes and goat cheese. Use your finger to spread a little olive oil on each potato slice (you will probably have extra potato slices). Bake the pizza until the crust is crisp and the potatoes are getting a little brown around the edges, 10-15 minutes depending on your oven.
Posted by Adrienne at 12:32 PM