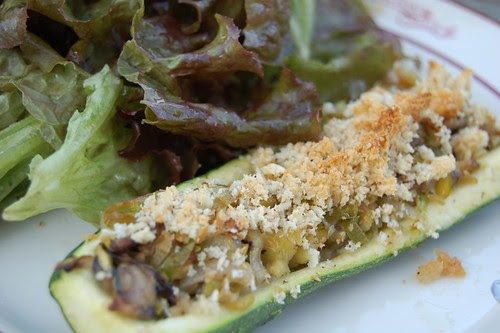 I don't know if I can even express in words how awesome it is to have vegetables back. Seriously. I forgot how much fun it is to pull together dinner with whatever's around at the farmer's market, and things are finally ramping up. The markets are aaalmost in full on summer mode - I'm just waiting for that first good tomato sandwich!

On Monday I bought a couple of zucchini (plus some rhubarb and strawberries for an awesome batch of jam) at the Central Square Farmer's Market and then I scrounged around for what we had left in the fridge from my week of finals prep and came up with this: stuffed zucchini that manages to pull a ton of flavor from not a ton of ingredients. The secret is to season the zucchini once you've hollowed them out, that way you don't get stuck with delicious filling in a bland and boring vehicle. Season your boats, folks! Oh, and this is vegan, but you could use butter instead of oil if you wanted a little more richness.

Stuffed Zucchini
serves 2 as a light main, 4 as a side dish

Preheat the oven to 350. Use a spoon to scoop out the flesh of the zucchini and chop the flesh; you're going for something like little zucchini canoes. Lightly grease a baking dish with oil and put the zucchini boats in it, cavity side up, and season with salt and pepper. Put them in the oven to begin softening while you prepare the filling.

Heat the vegetable oil in a skillet and cook the leek over medium low heat until soft, about ten minutes. Add the mushrooms and cook until lightly browned and then add the chopped zucchini flesh and the marjoram. Cook another 5-7 minutes, stirring, until the mixture dries out some.