Gravlax and what to do with it

I know you've all been dying to know, so:  I pulled a card for fruit tarts with almond pastry cream, fruit coulis and a flavored creme anglaise for my final practicum. It didn't go quite as well as I had hoped (my crusts were on the tough side). It seems to have turned out ok, though, because I got a call on Friday from the academic supervisor to tell me I'm the Valedictorian for my class. Eek! Now I have to write a speech. Double Eeek! 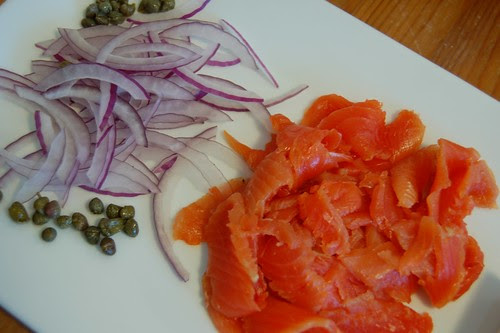 Anyway, graduation isn't until Saturday so by way of procrastinating writing a speech, I wanted to write here instead! Plus I wanted to tell you about my creative practicum! I called it "alternative charcuterie" because traditionally charcuterie means salamis and sausages and various porky products and I didn't use any pork. I made duck rillettes, mushroom pate and classic gravlax, plus mustard, cultured butter, dill pickled green beans, two kinds of crackers and a baguette. 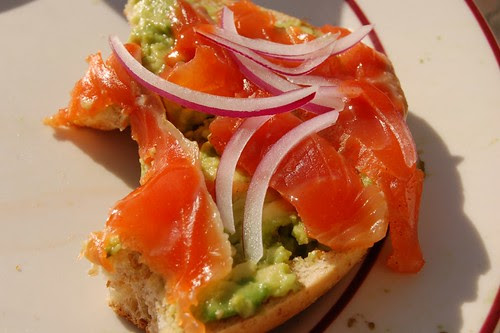 Gravlax is a Scandinavian dish of raw salmon, cured in sugar, salt and dill. It's also unbelievably easy. Go get a pound and a half of salmon in two pieces, remove the skin and pin bones. In a separate bowl, mix together 1/2 a cup each of sugar and kosher salt and a teaspoon of white pepper. Spread a bunch of dill over one piece of the salmon, sprinkle the sugar/salt/pepper mixture over that, and if you have it, sprinkle a couple of tablespoons of gin over that. Top with the other piece of salmon, wrap the whole thing in plastic and put it in a dish in the fridge. Flip it every 12 hours or so, but otherwise just let it do its thing for two or three days. Ta-da! When you're ready to serve, scrape off the dill and slice it as thin as you can. 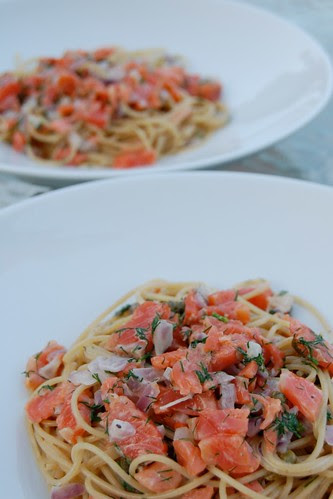 Now that you have a pound and a half of cured salmon, what do you do with it? Traditionally, you eat it on rye or pumpernickel bread with red onions and capers and maybe cream cheese. I made rye crackers to go with it for my practicum, and it was lovely. Here's the thing, though: I only used a few ounces of salmon and then I was left with more than a pound. We ate it with the remaining crackers the next day, and then for breakfast on bagels with avocado. Finally on Saturday night I used the end of it for this pasta dish.


Use some restraint when seasoning the sauce here, the salmon is pretty salty and you don't want to overwhelm the dish. And a note on timing: start to finish this whole thing took me about 20 minutes, ten for the water to boil and ten for the spaghetti to cook. The sauce comes together while the pasta was cooking. So easy. Also you could probably use smoked salmon, but there would be, of course, a smokey element and gravlax is so easy you really ought to try making it!

Bring a large pot of salted water to a boil.  Cook the spaghetti to al dente.

Meanwhile, in a medium skillet, heat the oil and saute the onion over medium heat until translucent. Don't let it brown, turn the heat down if you have to. Once the onion is soft, add the dill and stir, then add the cream and let it reduce until it's thickened a bit. Season with pepper. If the pasta isn't done yet, turn the heat off and let it hang out. It should be a little too thick, water from the pasta will loosen it back up.

About a minute before the pasta is done, turn the heat back on under the sauce, add the gravlax and capers. When the pasta is al dente, use tongs to transfer it directly from the water to the sauce, water clinging to the noodles will thin the sauce back out. Season with more pepper or possibly salt, if necessary, and serve.
Posted by Adrienne at 10:11 AM