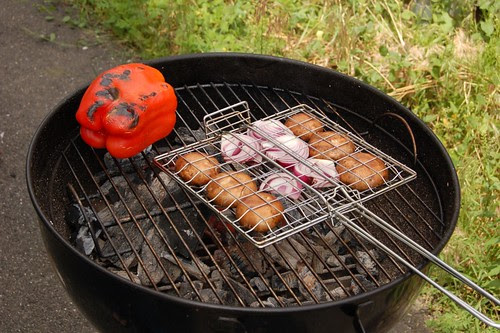 There's a little restaurant in Inman Square Cambridge called All Star Sandwich Bar. Yeah, you guys who've been there, I can see you nodding your heads. This place is ridiculously good and correspondingly popular. 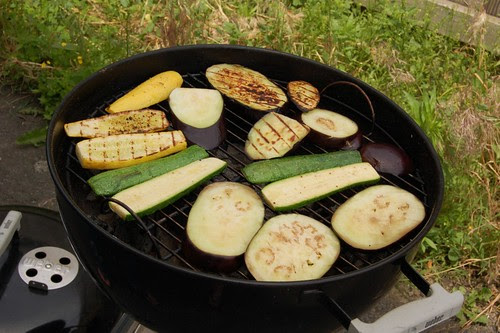 Usually when we walk by on a Saturday around lunch time it's packed with a line out the door, but for whatever reason, two weeks ago at noon there were plenty of tables and since we just happened to be hungry, we stopped. 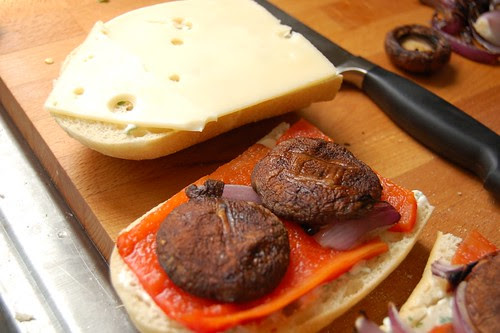 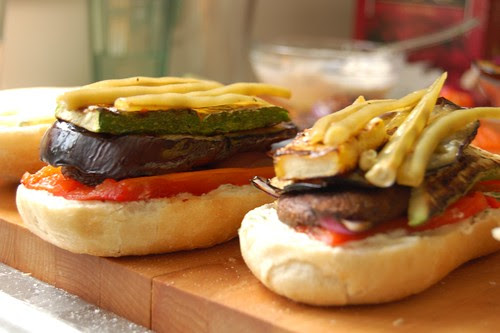 The sandwich in question is the Grilled Vegetable Cubano. Traditionally, a Cubano is a sandwich with roast pork, ham, pickles and swiss cheese, pressed and grilled. It is a totally delicious sandwich, but this all veggie version is lighter and quicker to put together, since, you know, you don't have to roast any pork. 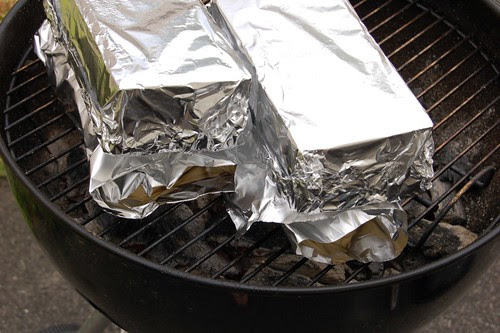 I used some soft crusted baguette-shaped bread I found at Whole Foods, standard baguettes would be too crunchy, so look for something more like a sub roll. What I should also have done is flip the sandwiches and grilled both sides, but I pre-heated the bricks so I assumed I was sort of grilling them both at the same time. Next time, I'll know better! 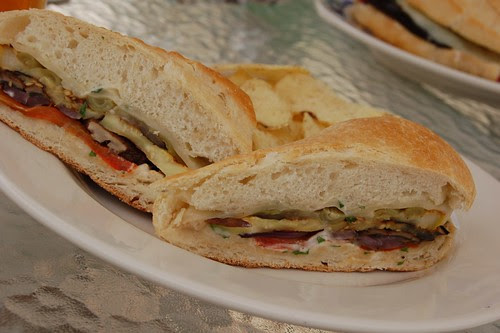 Grilled Vegetable Sandwiches
inspired by the All Star Sandwich Bar
I made two sandwiches from one 12-14 inch loaf of bread, but we had a ton of veggies left over, certainly enough for another sandwich or two. If you're going to make more sandwiches, you might want to double the mayo. Incidentally, homemade mayo would be outstanding here should you have the time or inclination.
1/4 cup mayonnaise
2 tablespoons cilantro, chopped
1-2 teaspoons lime juice
pinch of salt
one medium eggplant
one medium zucchini
one yellow summer squash
one whole red bell pepper
1/2 a red onion
two portabello mushroom caps, or 8 large cremini mushroom
vegetable oil
salt and pepper
4 slices swiss cheese
some sort of dill pickle - I used green beans, but you could slice cucumber pickles to an appropriate sandwich thickness
enough bread for two sandwiches (see note above)
First, mix up the mayo: stir in the cilantro and lime juice and season with salt. You might have to adjust the seasoning with more lime juice or more salt, just make it taste good. Cover it and put it in the fridge until you're ready to assemble the sandwiches.
Start a chimney full of charcoal for a charcoal grill, or preheat your gas grill. You're aiming for medium to medium-high heat.
Slice the eggplant on a strong bias into thick slices, between 1/3 and 1/2 an inch thick. If you have time, layer the eggplant with some salt in a colander and weight it down for about half an hour to squeeze out some liquid and leech out some of the bitterness. If you have a fresh young eggplant this may not be necessary. Slice the zucchini and summer squash the long way into the same thickness, maybe a touch thinner. Cut the onion into thick wedges; keep the root end somewhat intact so the wedges don't fall apart. Take the stems out of the mushroom caps. Brush all the vegetables except the pepper with a light layer of vegetable oil on both sides and season with salt and pepper.
On the pre-heated grill, roast the pepper until all the skin is charred. Place in a bowl, cover with plastic wrap, and allow to steam for 15 minutes or until cool enough to handle. Meanwhile, grill the onions, mushrooms, zucchini and summer squash. Rinse the salt off the eggplant (if you salted it), squeeze it dry with paper towels, and brush with oil and season. Grill the eggplant. With all the vegetables, you should cook them until they are soft with some grill marks.
Peel the red pepper and cut it into large pieces. Discard seeds and stem.
Leave the grill on while you assemble your sandwiches. In fact, put your bricks on the grill while you assemble the sandwiches. Slice the bread in half, spread each side with a teaspoon and a half of mayo, or to taste. Starting from the bottom, layer in this order: swiss cheese, red pepper, onion, mushroom, eggplant, zucchini, summer squash, pickles, top of bread.
Wrap each sandwich loosely in foil, then place it on the grill and weigh each one down with a foil wrapped brick. Careful, they're hot! Cover the grill and cook for five minutes or so, then (do as I say, not as I do!) carefully flip the sandwiches over and weigh again with bricks. Cover the grill for another couple of minutes or until the cheese is melted and the sandwich is completely awesome.  Remove from the grill, unwrap the foil, and slice the sandwiches. Serve with potato chips and a pickle, deli style.
Posted by Adrienne at 8:57 PM