Brussel Sprouts are NOT icky. 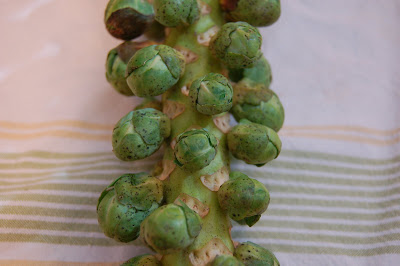 Things are getting slow at the Farmers' Market in Government Center. A lot of the vendors pack it in at the end of October, but the heartiest will stick it out until Thanksgiving. I'm pretty bummed out about the idea of five months without super-fresh-just-picked vegetables, but I'm making the most of what's there now, and that includes Brussels Sprouts. Now don't run screaming for the hills you big baby - they're delicious! You just have to be nice to them. 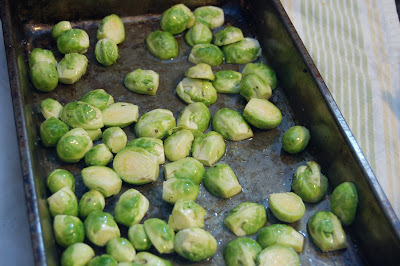 I picked up a branch of these eensy weensy specimens last Wednesday. The small ones, once trimmed, were the size of my thumb nail, so I just threw them in the pan whole, and I cut some of the larger ones (large being totally relative here, they were still no bigger than a ping pong ball) in half so they would be closer in size. 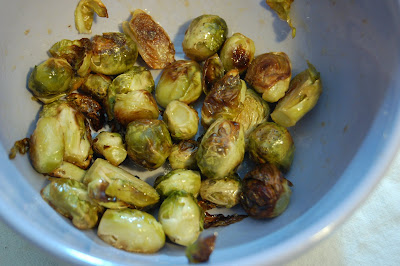 Roasted in the oven with simple seasoning and oil, these mini cabbages make for a totally delicious and unbelievably good for you side dish. This bowl above was full, but I only remembered half way through that I wanted a photo of the finished goods. If you can't find dollhouse sized sprouts, just cut the regular ones in quarters.

Preheat the oven to 400 degrees.

Wash the sprouts, removing any tough or discolored outer leaves. If you bought them on the branch, be sure to trim the stem end off as well. If using regular sized sprouts, cut them in quarters or in half. Place in a pan, season generously with salt and pepper, and toss with a few tablespoons of olive oil. Roast until golden brown with darker spots, stirring once, at lest 20 minutes. Larger sprouts will take longer.
Posted by Adrienne at 10:08 AM

Email ThisBlogThis!Share to TwitterShare to FacebookShare to Pinterest
Labels: vegetables