The week before I went to Atlanta, Hugh celebrated a slightly momentous birthday - not one that ends in a 0 or anything, but a birthday nonetheless. A few months earlier, she had inquired about key lime pie, but when I suggested it for the Big Event, she said "how about cheesecake?" How ABOUT cheesecake? Yes! I've never made a cheesecake before, but key lime cheesecake sounded like the perfect compromise. 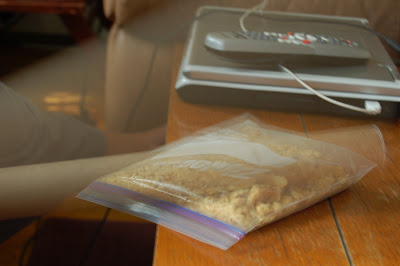 Step one: Obtain graham cracker crumbs. I accomplished this by giving Hugh a baggie full of crackers and a stick with which to beat them. 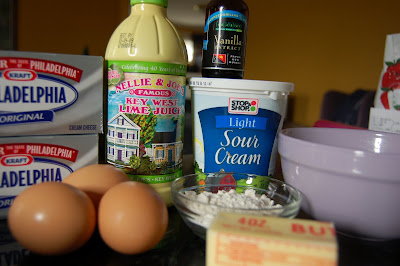 Step two: Take wonky picture for your blog so people can see you are not insane and did not juice 1,304,798 teeensy weeensy key limes. Couldn't find them, actually. I went with bottled key lime juice and do not feel bad about it. I do feel bad about the crookedness of this photo, though. Oy. 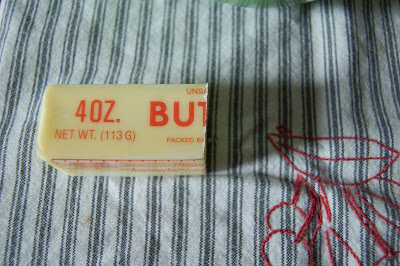 Step three: Stop describing this in steps, because it could get very annoying. I like that this recipe only had half a stick of butter in it, so I took a picture of it. Oookay. 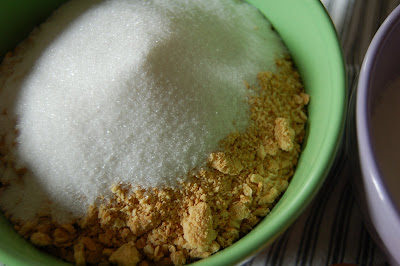 As previously mentioned, I had never made a cheesecake before, but it wasn't that scary. The crust only has three ingredients, and the filling was easy enough to pull together with my trusty handheld mixer. Plus there's cream cheese. Mmm. 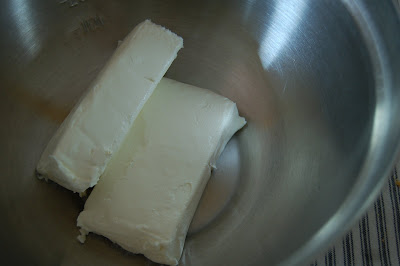 I had read all the reviews on the original Epicurious recipe (reviews are the best part of Epicurious, for sure), and a lot of people mentioned the trouble they had getting the cake to set. I didn't really have any such trouble, but as you can see from one of the photos below the top of my cake had some pretty hefty cracks across it. 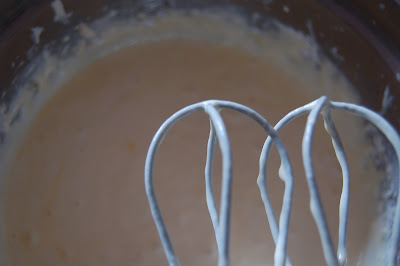 Luckily, they were covered up with the whipped cream topping. Oh and a note about that - if you make this, make more than the recipe calls for. I wanted more. 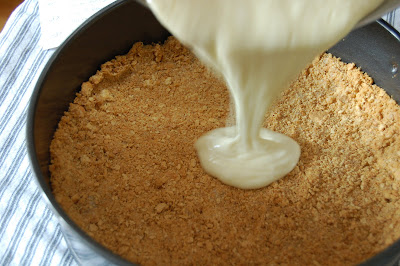 I also skipped the whole 'mango ribbon' thing. It seemed rather fussy to me, and I knew I would have to wait to top the cake until just before we ate it. What that means is there would be people hanging out in my apartment, silently shaking their heads as I photograph the dessert they are waiting to eat. Add in the fact that good mangoes are tough to find in New England no matter what time of year, and it seemed that raspberries would be an easier way to lovelify (lovely-ify? can you spell it 'wrong' if it's a made up word?), so that's what I did. 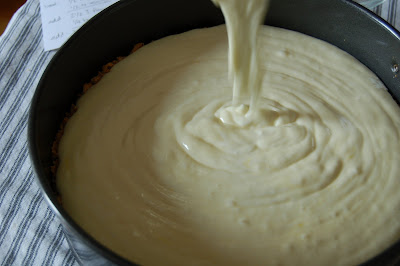 How'd it go? Well it's cheesecake, so it's hard to imagine it was BAD, right? Oh my friends it was so the opposite of bad. It was delicious. I loved the tang from the lime juice, and the barely sweetened whipped cream cut through it very nicely, the raspberries were juicy and delicious and the crust was tender and crumbly. I liked it. Hugh liked. Birthday cake success is mine! 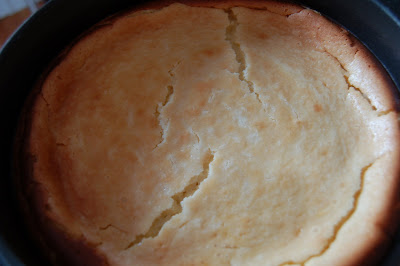 If you have a cheesecake lover in your life and you've never tried it before, let me repeat: don't be scared. You can do it, and you won't regret it. 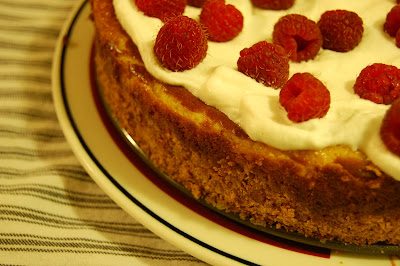 Special equipment: a 9- to 9 1/2-inch springform pan
1. Preheat oven to 350 and butter then sides and bottom of the springform pan. In a bowl combine the crumbs, sugar and butter, then use your fingers to press it evenly onto the bottom of the pan and about 1/3 of the way up the sides. Bake for 6-8 minutes, just until golden. I took mine out after six minutes because several reviewers had mentioned their crust got overcooked while they waited for the center to set.

2. Reduce oven temp to 325. Beat the cream cheese with an electric mixer until very fluffy, then beat in the sugar; be thorough so your cake won't be too heavy. Add sour cream, lime juice and vanilla; beat until smooth. Add eggs (all at once!) and mix just until incorporated.

3. Pour the filling into the crust and put the springform pan onto a baking sheet (in case of leaks). Bake until cake is set in the center, 60-70 minutes. I went to 70, but my cake had just the slightest bit of jiggle in the middle. Knowing it will continue to set up as it cools, I didn't want to overdo it. Cool cake completely in the springform pan on a rack. When cake is completely cool, run a thin knife around the edge of the cake before releasing the pan. Chill in fridge for at least 8 hours (or two days, if you're me).

4. When read to serve, beat cream and sugar in a bowl with an electric mixture until it just holds stiff peaks, then spread over top of cheesecake. Dot with raspberries, and serve. I like cheesecake cold, so I served it straight from the fridge, but you could also let it come up to room temp before topping and serving.