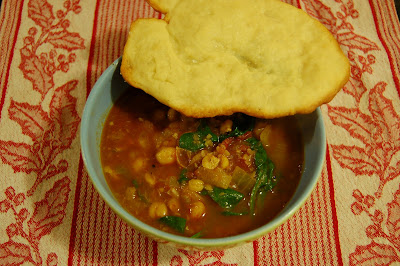 As you may recall, I have a thing for chickpeas. I eat them at least a few times a week (if not every day) in one form or another: in salads, as hummus, or during the cooler months, in this delicious spicy soup. The recipe comes from a show on the food network that I've only seen once, probably because according to the web site it airs Monday mornings at 9:30 am. Not terribly convenient. 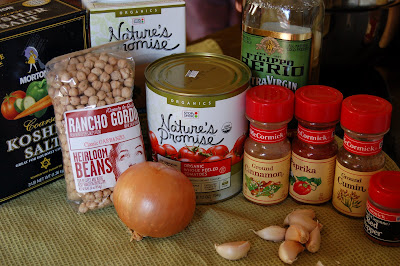 I saw it years ago and I've been making it ever since. It makes a big pot, so if you're only feeding a few people there are usually leftovers. I often serve it with some sort of flat bread, and I like to make my own. This "naan" recipe by Emeril is NOT naan but it IS easy and this weekend I didn't have any plain yogurt in the house. If you decide to make a naan-like flatbread, I suggest a recipe that has yogurt like this one, but if you're in a hurry and out of yogurt, that first one will get the job done, anyway. 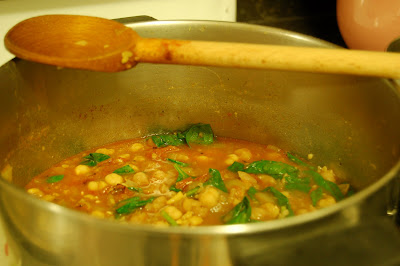 This time around I used some Rancho Gordo garbanzos I ordered a few weeks ago and they are FANTASTIC! But I had to soak and cook them before I could start the soup, which takes several extra hours, but you can use a good quality canned bean too. I have, and no matter what you serve it with, this is a winning combination of spices that makes for a very satisfying soup. 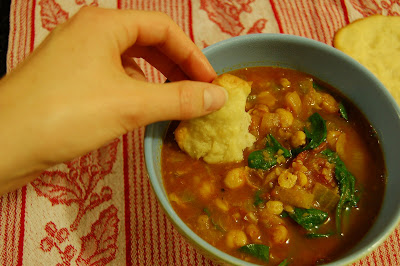 Heat the olive oil in a large pot over medium heat. Add the onion and garlic and saute, stirring occasionally, about 5 minutes until the onion is translucent. Add the ground spices: cinnamon, cumin, cayenne and paprika and stir for 30 seconds or until spices are fragrant. Add the tomatoes, chickpeas, sugar and broth, season with salt and pepper. Chickpeas should be barely covered with liquid, if not, add a little water. Simmer over low heat for 30-45 minutes. Just before serving, add the spinach and stir for a minute or so until wilted. Taste and correct seasoning if necessary, serve hot with bread.
Posted by Adrienne at 10:57 AM