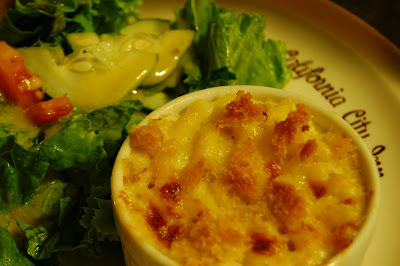 Guys, I'm not ready for fall. I know, I know! It's freaking OCTOBER. It's already fall; and it's been weeks since the last summery day. I bought a winter coat this weekend. But I'm just not mentally prepared for the cooler months! We didn't have enough summer, and I didn't eat enough tomato salads.

I think that's why I've been in a bit of a funk lately; that and I had a killer cold about a week ago and I'm just now emerging from the fog. I made this scrumptious macaroni and cheese last week, and I've been so listless as to put it off until today! My pictures are less than amazing for this dish (it was dark), so I'm only showing you finished shots - sorry! Another note - I baked this in two six-ounce ramekins and a 9x9 baking dish. It was just Adam and me for dinner, so mac and cheese and a green salad was plenty, but you could probably stretch this into six (or maybe even eight) ramekins if you were making it part of a more complex meal.

This recipe is adapted from Alton Brown and I've made several adjustments, but two years ago when I first made it, I followed his recipe to the letter. Alas, nobody I made it for that first time was around last week, so I'm the only comparison you get. I like the spicy undertone from the aleppo pepper, but if you don't have aleppo (I got mine at Christina's specialty spice shop in Cambridge) you could use sweet paprika and cut it back to 1/2 a teaspoon. I also used homemade breadcrumbs that I had whizzed up in the food processor and stuck in the freezer when I had a loaf of Italian bread going stale on the counter last month. I used a combo of 2% and whole milk because I could buy them in small containers, but use 3 cups of whatever milk you want. I would skip the skim, though; if you're looking for diet food, this recipe is not for you.

This was the first comfort food of the fall for me, and you will no doubt see more as I begrudgingly embrace the falling temperatures. In fact next up is meatloaf, per Hugh's suggestion. I hope you enjoy this macaroni and cheese! 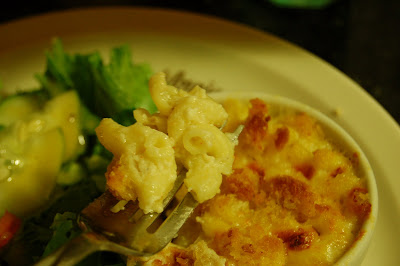 In a large pot, cook the pasta in salted boiling water until al dente - don't overcook the pasta, it's going to keep cooking in the oven. Meanwhile in another large pot over medium heat, melt the butter. Add the flour and mustard and whisk until smooth - continue whisking while roux cooks, about 1 minute. Add milk, onion and aleppo pepper and simmer over low heat for about 10 minutes.

Beat the egg lightly in a small bowl. Add a few tablespoons of the hot milk mixture to the egg to temper, then add the egg to the pot with the milk. Fold in 3/4 of the cheese and stir until melted. Season with salt and pepper, taste, and adjust seasoning if necessary - mine needed more black pepper. Add the cooked pasta and stir to combine. Pour the macaroni and cheese into your preferred baking dish or dishes (at least a 9x13 baking dish or six six-ounce ramekins or a combo of ramekins and a smaller baking dish - see my notes above).

Melt three tablespoons of butter over medium heat, add the breadcrumbs and toss to coat. Top baking dish or dishes with remaining cheese and breadcrumbs. Bake for 30 minutes until golden brown and bubbly. Now for the hardest part: let stand about 5 minutes before serving.