Whole 30 has been an interesting challenge for me - how to fill my plate up with veggies instead of starch. Normally I'd have made pasta or rice or gotten good bread to go with this fish stew, but instead I roasted a whole head of cauliflower. It was delicious! And I really liked having a plate full of vegetables. I made Salmon Veracruz because we only had two salmon filets in the freezer and it's easier to make that last in chunks than if we were to just eat the filets!

For the salmon, I satueed one large onion, diced, and a sliced clove of garlic in olive oil. I added one bell pepper, sliced, and two large zucchini cut into batons. I added 28 oz of diced tomatoes and let it simmer for a while, then shut it off and let it sit while I went to a toddler birthday party. When we got home I turned the stove back on, added a bunch of green olives and about 12 oz of salmon cut into chunks. Put on the lid and simmer till the fish is cooked. I should have added capers and raisins, but I mostly forgot and was hungry. It was great without them!

The cauliflower I cut off the bottom and took off the leaves, rubbed the whole thing with olive oil and salt, and stuck it in a cast iron skillet. Covered it with foil in a 375 oven for 45 mins, then took the foil off and bumped it to 400. It was browned 45 mins later, approximately, but I think I should have taken the foil of sooner as the inside was a liiiiiittle bit mushy. I look forward to trying it again. 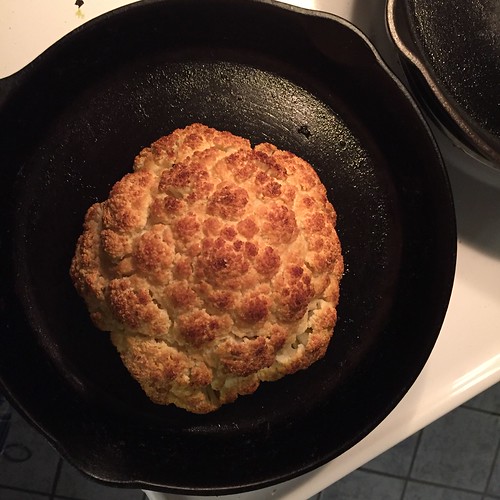