An Actual Use for Leftover Shellfish 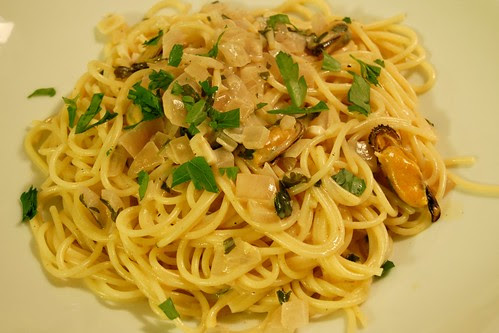 I know, it sounds preposterous. But hang with me for a second! Don't throw away that last dozen mussels nobody could eat (and remember for next time that two people, especially if they are called Adrienne and Adam, really only need two pounds of mussels, not two and a half, because frankly, those two people will just fill up on bread sogged in delicious mussel broth and then use too many commas explaining it). You can stretch it into another meal, I promise.

So here is what you do: before you stash the leftovers in the fridge, take the remaining mussels out of their shells and plop them back in the broth. Discard the shells. If you served the mussels in a pot, leave the whole mess in the pot, as it will be easier to heat up later and save you 45 seconds of dishwashing time. Pop it in the fridge.

The next day, put the mussels and broth over low heat and warm them up slowly. Slowly! This way you can gently bring the mussels back up to edible temperature without rubberizing them. Meanwhile, cook half a pound of spaghetti. When the spaghetti is almost done, turn the heat on the mussels up to medium so it's just barely simmering. Drain the spaghetti just before it's done and finish cooking it in the mussel broth, this way it will absorb the deliciousness. Sprinkle with a bit of fresh parsley if you plan to take a picture for your blog, otherwise, just eat it.
Posted by Adrienne at 7:16 PM