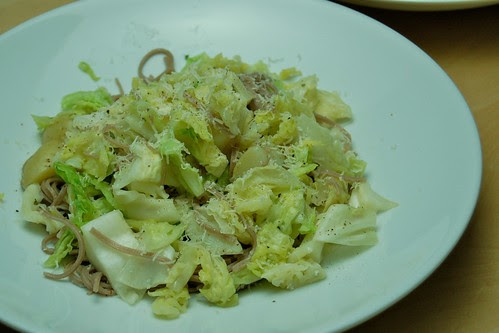 When I shopped for kimchi supplies, I bought two cabbages. The second one I bought, and the one I ended up using was a medium sized grocery store napa cabbage. But first I bought an ENORMOUS (as in 4 pound) savoy cabbage at a farmer's market. And then I had to figure out what to do with it.

As has become my routine when I have excess veg in the house, I turned to Deborah Madison. This Savoy Cabbage with Potatoes and Brown Butter had a note that it was good on its own or with buckwheat noodles, and I had some soba in the cabinet, so while the cabbage steamed, I cooked up the noodles.

Brown butter and sage are a classic flavor pairing, especially with potatoes (or winter squash, mmm), but the cabbage takes it in a different direction that is unexpected and delightfully crisp. If you've got some stage still holding its own in the garden, this is a nice way to use up a bit before the hard frosts take it for good.

Certainly you could boil the potatoes and saute the cabbage if you didn't want to set up a steamer, but it went pretty quickly and then there's one less pan to clean!

Scrub the potatoes and cut them into 1 inch chunks (or smaller if you like). Steam in a steamer basket over boiling water for 15 minutes or so, until the potatoes are tender. Remove them to a bowl and cover the bowl to keep them warm.

If you're using noodles, bring some water to a boil while the potatoes steam and cook according to package directions. Combine the sage and brown butter in a small bowl.

Steam the cabbage, tossing it every once in a while until it's tender, five minutes or more. Add to the bowl with the potatoes, then add the brown butter, sage, cheese, and plenty of salt and pepper. Toss with noodles, if using, then enjoy.

*To make more brown butter than you need, cut a stick or two (might as well make plenty while you're at it) of butter into large chunks and melt over medium-low heat in a saucepan. The butter will foam, and then the foam will subside and the milk solids will sink to the bottom and begin to brown. When the butter smells toasted and nutty, pour it immediately into another container; if you leave it in the sauce pan the residual heat will burn the butter. Stick the leftover butter in the fridge, you'll find a way to use it (like I said, winter squash, yum).